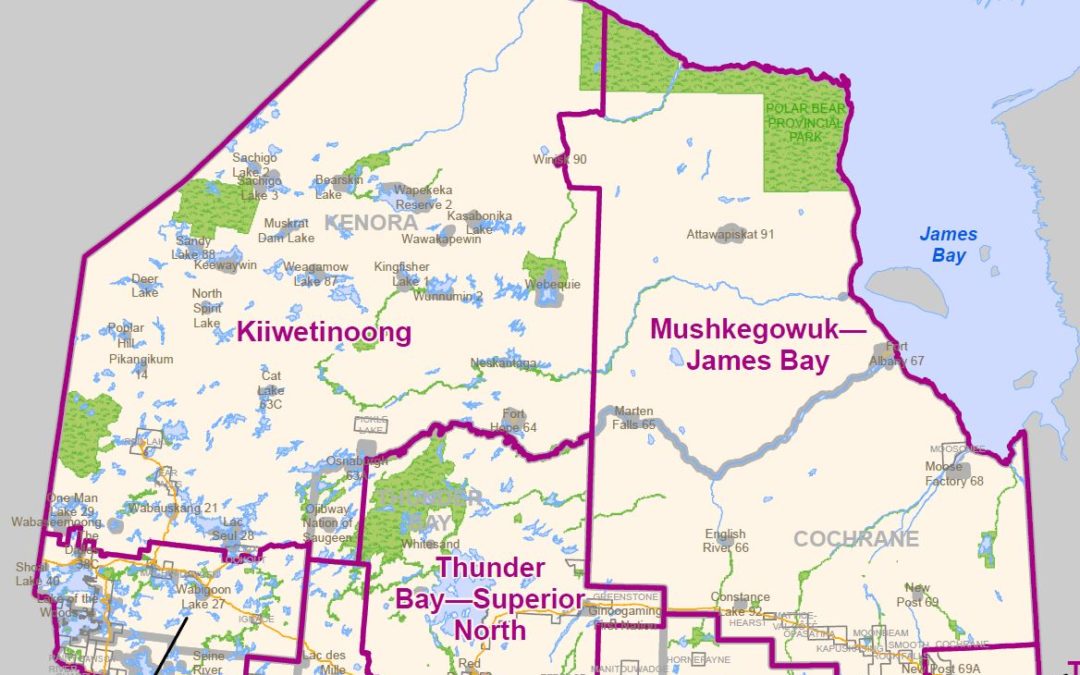 April 17, 2018 – In the coming weeks, Counsel will be analyzing the toughest battlegrounds in Election 2018. These are the ridings we’ll be watching during the campaign and on election night to tell us how the political map will be redrawn. To kick things off, here is our look at the ridings in Northern and Eastern Ontario that are on our political radar.

Northern Ontario encompasses a huge swath of the province, stretching from the near northern cities of North Bay, Sudbury and Sault Ste. Marie all the way to the shores of Hudson Bay. The unique character of each of Northern Ontario’s larger cities, as well as the distances between many of its communities, makes the experience of Northern MPPs very different to those of most of their southern counterparts. The Northern Ontario economy remains fragile, despite recent growth in the mining sector and relative stability in forestry. Northerners are highly attuned to pocketbook and quality of life issues that disproportionately affect them: energy prices, access to health care services and road and bridge infrastructure. As it stands today, these make for a difficult climate for the governing Liberals in the North, and “kitchen table” concerns are creating an opportunity for the PC Party in the traditional two-party contest with the NDP. We saw an early sign of this in last year’s by-election win by the PC candidate, Ross Romano, in Sault Ste. Marie. The creation of two additional Northern Ontario electoral districts – Kiiwetinoong and Mushkegowuk-James Bay – will increase the Northern presence at Queen’s Park, as well as give greater voice to Northern Ontario’s large Indigenous community, which continues to face persistent challenges and inequality. Eastern Ontario, on the other hand, largely falls into one of two categories: Ottawa, and everything else. Beyond Toronto, Ottawa has proven to be the Ontario Liberals’ most dependable bastion of support, and recent by-election successes suggest a good chance of that continuing. The Liberals can also reasonably anticipate strength in some smaller strongholds (Kingston, with its large student and civil servant population; and Glengarry-Prescott-Russell, one of Ontario’s most Francophone ridings) as well as where individual MPPs may have an exceptionally strong personal brand. The balance of the East is a traditional bedrock for the PC Party and puts the re-election prospects of several Eastern Ontario Liberals in the opposition’s crosshairs.

Why we’re watching: Kanata-Carleton, comprising the outer suburbs and rural areas of the western end of Greater Ottawa, is shaping up to be a very intriguing four-way race. Jack MacLaren, the arch-conservative former President of the Ontario Landowners Association, is running for re-election under the Trillium Party banner, seeking to be first MPP elected for the upstart conservative party he joined after being ejected from the PC caucus following several instances of sexually inappropriate behaviour. MacLaren, the incumbent in the former riding of Carleton – Mississippi Mills, is facing a strong PC challenge from Kanata family physician Merrilee Fullerton. The struggle between two sides of the PC Party base – traditional rural conservatives versus more moderate, suburban fiscal conservatives – creates the type of environment that could conceivably see the Liberal or NDP candidate sneak up the middle in a surprise victory.

Why we’re watching: Stretching across a swath of middle-class, predominantly anglophone suburbs in the west end of the City of Ottawa, Ottawa West – Nepean straddles more established neighbourhoods in the city proper and the faster-growing outer suburbs of Nepean and Kanata beyond the Capital Greenbelt. It’s a perennial battleground and high-profile target for both the Liberals and PCs. Incumbent Bob Chiarelli, the former Ottawa Mayor and long-standing Cabinet Minister in both the McGuinty and Wynne governments, bested a determined challenge in each of the last two elections from Randall Denley, a well-known journalist and star PC candidate. Although Denley isn’t on the ballot this year, the provincial political climate makes this the PC Party’s best opportunity to put a dent in the Liberal’s small-but-significant “Fortress Ottawa.”

The PCs haven’t done themselves many favours locally. Karma Macgregor, a long-time party organizer and the mother of one of former PC leader Patrick Brown’s top aides, found her narrow nomination victory (15 votes) dogged by accusations – by former Conservative Senate Leader Marjory LeBreton no less – of fraudulent voting and ballot stuffing. Responding to internal and external concerns about way the nomination was conducted, the PC Party announced in early February that it was overturning Macgregor’s nomination. Chosen by acclamation to run in her place is ex-federal Conservative staffer Jeremy Roberts, whose minimal local profile may be further hampered by Macgregor’s pronouncement that she intends to fight her removal in the court. Time will tell whether Chiarelli’s widespread local recognition and the local PC turmoil will be enough to secure a Liberal re-election.

Why we’re watching: More than any other riding, the race in the Nickel City is likely to be impacted by fallout from the political scandals that have agonized the Liberals since 2011. Thibeault, a popular NDP Member of Parliament, was a prize Liberal recruit to run in the provincial by-election following the sudden resignation of newly-elected NDP MPP Joe Cimino in 2015. Although Thibeault triumphed in the by-election, accusations by a competing Liberal candidate that he was proffered patronage to withdraw from the race set off a political tempest that played out daily at Queen’s Park for months. Although Thibeault himself was not directly implicated, the matter received tremendous local and provincial press. In the end, a judge dismissed charges against two Liberal insiders by way of a rare directed verdict. Despite this vindication, negative public impressions resulting from months of controversy may have taken a toll on Thibeault’s re-election prospects

His NDP challenger, Sudbury and District Labour Council President Jamie West, comes with rock-solid labour bona fides and seems well-poised to flip this seat back into the orange column. Perhaps better still for West: as incumbent Minister of Energy, Thibeault has been front-and-centre on defending the privatization of Hydro One and high energy prices, both of which are at the top of the issues list for the NDP going into the spring campaign.

Why we’re watching: Cats have nine lives; then there’s Bill Mauro. After surviving two razor-thin re-election campaigns in 2007 and 2011, Mauro secured a comfortable victory in 2014 following his then-recent elevation to Cabinet. Since that time, the strength of the Liberal brand in Northern Ontario has waned, with numerous opinion polls showing the party running third behind the NDP and the PCs. The race is once again shaping up to be a dogfight for Mauro, who nevertheless has some advantages in his corner. In addition to having represented the riding for the past 15 years, both the PCs and NDP have struggled to field a strong candidate to oppose him. The NDP unexpectedly had to go back to the drawing board when former NDP MP John Rafferty withdrew his nomination following a serious medical diagnosis, nominating local public service union official Judith Monteith-Farrell as his replacement in March. The PCs have nominated Brandon Postuma, a rookie candidate and small business owner from the rural community of Oliver Papooinge. Although now a senior statesman among the Liberal caucus, Mauro remains a “Thunder Bay-Atikokan first” member who has never lost his focus on the people that sent him to Queen’s Park – something that may serve this “cat” well in another tough campaign.