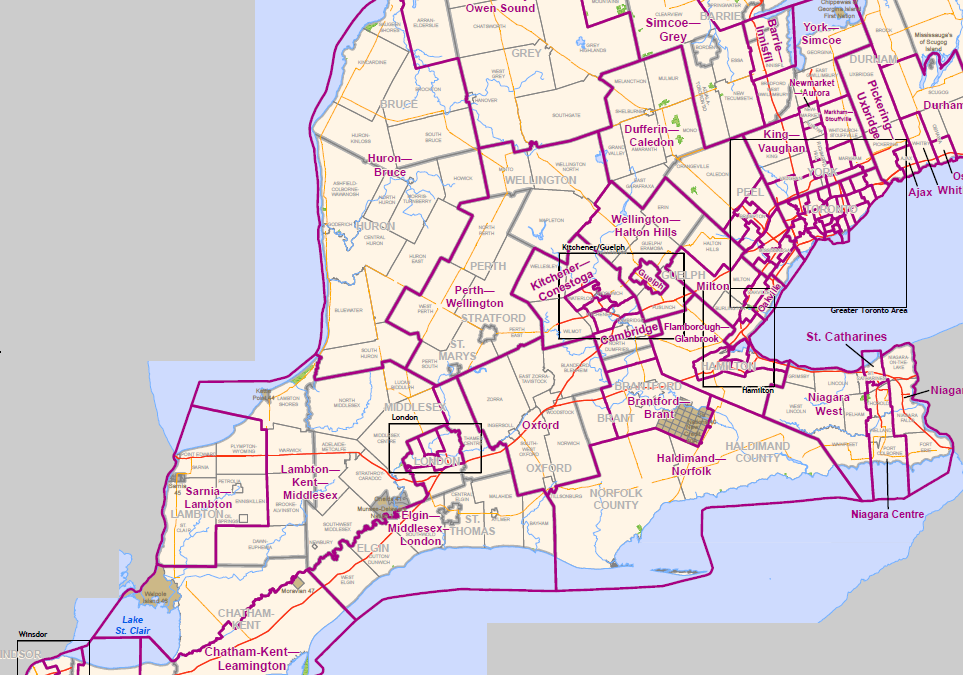 Continuing Counsel’s overview of the ridings to watch in the upcoming 2018 Ontario Provincial Election, today’s installment takes a look at the province’s traditional manufacturing heartland: the urban areas of Southwestern Ontario. Perhaps no other part of Ontario has changed as much in the last decade as Southwestern Ontario. In what looks like bedrock territory for the PC Party, it can be hard to recall that most of rural Southwestern Ontario was represented by Liberal members as recently as 2011. Those rural, agricultural ridings are now almost uniformly PC, and likely to stay that way after this election. The Tories will be looking to add to their tally in the more urban parts of the Southwest.

With its extensive transportation links and easy access to the U.S. market, the region was the heart of Ontario’s traditional industrial economy. While the Southwest had long experienced a steady decline in its manufacturing base as a result of broader de-industrialization and NAFTA, the fallout of the 2008 recession was immediate and without precedent. The economic crisis decimated the region’s employment base, hollowing out the economies of many Southwestern Ontario communities. While the region’s economy has seen some steady improvement in recent years, the impacts were deeply felt and the pace of recovery is unequal. While some communities continue to struggle, several of its larger centres – particularly Hamilton and the Kitchener-Waterloo-Cambridge-Guelph cluster – are in the midst of sustained transformation, attracting future-oriented employers and thousands of new knowledge-sector employees. The result is an evolving patchwork where issues like climate change, agricultural sustainability, and the opioid epidemic may rank as the top concern for voters in different communities only kilometres apart. (Many residents still don’t care much for wind turbines, either).

Why we’re watching: London North Centre always seems to be a three-horse race, and all three major parties work hard to nominate strong candidates and mobilize their supporters. The stakes are higher than usual this year with the impending retirement of Liberal stalwart Deb Matthews, who has held the riding since 2003 while serving in the front rank of successive Liberal cabinets. Without the benefit of Matthews’s long incumbency and her high profile, first-time candidate Kate Graham will be in a tough fight to hold the seat for the Liberals. The up-and-coming municipal official is facing a strong challenge from former Conservative MP Susan Truppe, who is seeking to win back the seat she previously held federally. The local NDP apparatus is strong and well-organized behind teacher Terence Kernaghan. The winner may ultimately owe her/his success more to provincial forces than local labours, but each candidate will be trying hard to highlight unique abilities to balance the downtown and suburban interests of this varied district.

Why we’re watching: While Waterloo is often the focus of the region’s economic success story, Kitchener has seen parallel economic benefits. Thousands of educated young professionals have relocated to the city in recent years or stayed locally to start their careers following graduation from the region’s universities and colleges. The riding has deep Liberal roots, with the district and its antecedent having been represented by Liberal MPPs for all but eight years since 1967. The changing economy and profile are driving a shift away from its traditional moderation towards progressive politics more akin to nearby Guelph.

Although MPP and former broadcast journalist Daiene Vernile won the riding handily in her first election in 2014, the result didn’t reflect how competitive the riding continues to be. John Milloy, the well-liked Liberal MPP and Minister, eked out a razor-thin re-election in 2011 by less than 350 votes. Despite Vernile’s victory in 2014, both opposition parties were nevertheless able to get over 20% of the vote, reflecting the strong and balanced competitiveness of the riding. Her 2018 challengers, both of whom are women, also have strong socially progressive bona fides that will help either make the argument that they can effectively represent the interests of the community. Vernile, who was recently elevated to Premier Wynne’s Cabinet, will have to work hard to ensure that her strong local profile and the popularity of some Liberal programs can again carry the day.

Why we’re watching: You really can’t make this stuff up. The retirement of Michael Harris in the wake of sexual misconduct allegations was a late-breaking shocker for the PC Party. Harris was considered a safe bet for re-election, and a strong candidate for a Cabinet position in a future PC government. Following his election in 2011, Harris was the butt of light-hearted commentary on the fact that he shared the same name as the former Ontario Premier and PC Party Leader (no relation). If that weren’t unusual enough, PC Leader Doug Ford has now appointed the former Premier’s son, who recently lost his attempt to secure the PC nomination in the neighbouring riding of Waterloo. His name? Mike Harris Jr. of course! Any confusion over names aside, there is every reason to anticipate a PC hold in Kitchener–Conestoga.

Still, the PCs cannot take it for granted. Kitchener–Conestoga is consistently competitive: the riding was held by Liberal MPP Leeanna Pendergast between 2007-2011, and Harris’s margin of victory was only about 3% over his Liberal challenger in 2014. Any faltering by Doug Ford and the PC Party on the provincial stage could put this seat into a toss-up. The unexpected wildcard is the NDP, which is a growing force in the riding. From a lowly 12% of the vote in 2007, the NDP has seen its share of the vote grow steadily in the last two elections, hitting 17.5% in 2011 and 21.19% in 2014. Kelly Dick, a member of the Waterloo Region Labour Council Executive, will be a compelling choice in the event that Ontarians look towards a “third path” between the Liberals and PCs.

Why we’re watching: When Ted McMeekin stepped down from Cabinet in June 2016, it was widely anticipated that he was headed towards retirement. His decision to seek re-election in this year’s election was a significant boon to Liberal fortunes in this perennial PC Party target, as McMeekin has represented the majority of this ever-changing riding since 2000. While McMeekin has seemed rejuvenated by his return to the constituency-focused politics of the backbenches, the new riding boundaries may have also helped make the decision easier for the former Mayor of Flamborough. The continuing growth of the Greater Hamilton Area made it necessary to create a new electoral district in the area, and the result was very favourable to McMeekin. The redrawn riding shifted much of the large rural and exurban areas of Flamborough and Waterdown into the new riding of Flamborough–Glanbrook, while retaining his more urban base in Dundas and Westdale.

Nevertheless, the PC Party anticipates mounting a strong challenge fuelled by the rapidly-growing southern suburbs in Ancaster. Those hopes were complicated by accusations of a ballot-stuffing scandal embroiling the nomination of the original PC candidate, Ben Levitt, which became the subject of a criminal investigation by Hamilton Police. In the wake of this controversy, the PC Party opted to hold a new nomination for the riding. Levitt, a 26-year-old staffer for the local MP, again won, securing the nod by a healthy margin over Vincent Samuel, a former federal Conservative candidate and a regional co-chair for Doug Ford’s PC leadership campaign. What impact all of the local PC tumult may or may not have on the campaign and election day remains to be seen.

Why we’re watching: If the PCs hope to form government, re-capturing seats like Cambridge is a must-do. For many years a battleground between the PCs and the NDP, Cambridge was consistently “blue” territory since the 1995 Common Sense Revolution, when the late Gerry Martiniuk was first elected. That all changed in 2014 when Kathryn McGarry, a local nurse and community activist, defeated Martiniuk’s successor Rob Leone on her second attempt – becoming the first Liberal to represent the riding since its creation in 1975. McGarry has spent the last two years in Premier Wynne’s Cabinet, initially as Minister of Natural Resources and Forestry before earning a recent promotion to Minister of Transportation. The new portfolio will only enhance McGarry’s visibility in her home region, where the province has made several high-profile transportation and transit investments, including the new ION rapid transit system, set to begin operations this year.

Despite its long history as a PC-held district, the riding is traditionally competitive – since 2003 the Liberals have always secured more than 33% of the vote, even in losing efforts. The recent boundary changes to the riding may make McGarry’s challenge steeper, as the re-mapped riding exchanges the suburban neighbourhoods of Hespeler for rural lands in the north of Brant County, a change that may give the PC Party the strong edge it needs to flip the seat back into their column.

In a year where the PC Party has struggled with nominations in several targeted ridings, Cambridge may take the grand prize. Two cancelled nomination meetings were followed by rampant speculation of a star candidate, though in the end Christine Elliott and Tanya Granic Allen both opted to run elsewhere. The nomination of late entrant Belinda Karahalios in mid-April is notable. Her husband, lawyer and conservative activist Jim Karahalios, was a persistent thorn in the side of former PC Leader Patrick Brown. Karahalios ran the “Axe the Tax” campaign against Brown’s commitment to a revenue-neutral carbon tax, an effort that led to his expulsion from the party followed by a mea culpa from interim leader Vic Fedeli after Brown’s resignation. If the “Axe the Tax” campaign is any indication, Belinda Karahalios’s well-funded local campaign, committed supporters, and the favourable provincial environment may give her an edge against the incumbent McGarry.