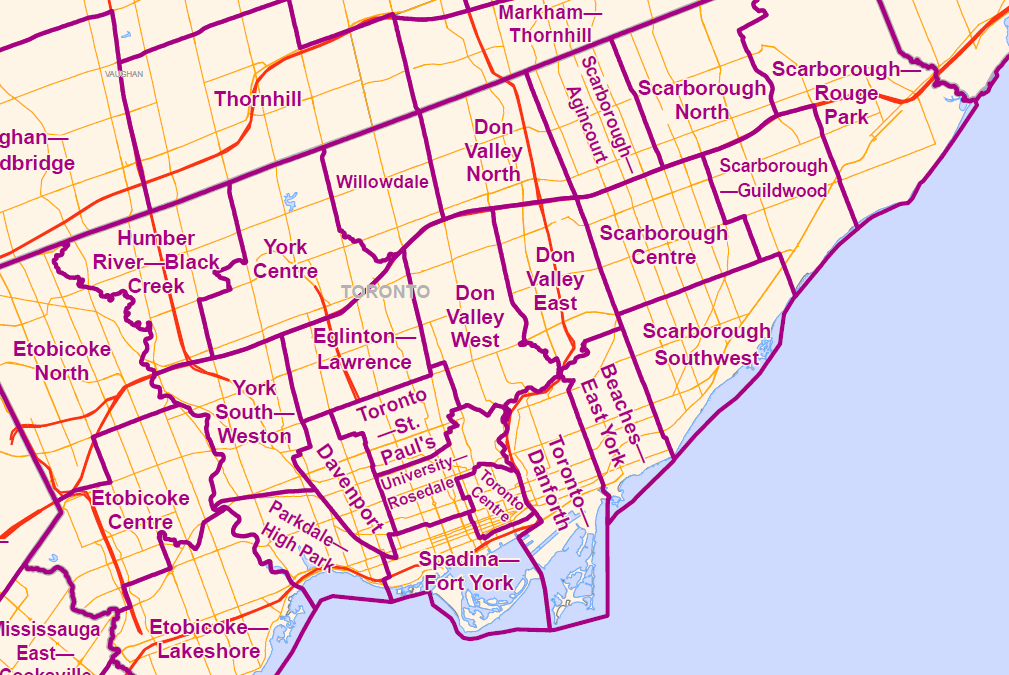 May 8, 2018 – With the writ about to drop, this is our final installment of Ridings to Watch. We’re taking a closer look at the tightest races among the 25 seats that make up Toronto, Canada’s largest city and the capital of Ontario. Hogtown. The Big Smoke. The 6ix. The Centre of the Universe.

For decades, Fortress Toronto has been a bedrock for successive federal and provincial Liberal governments. Many elections have seen Liberals dominating within the city limits, with opposition parties calculating whether they can win enough seats beyond the 416 to form government. Going into this year’s election, the city’s caucus has never been redder, with all but three Toronto MPPs serving on the Ontario Liberal government’s bench.

Yet there are flickers of optimism for both of the opposition parties. The success of both Conservative and NDP candidates in the 2011 federal election proved that this Liberal bastion isn’t impregnable, particularly if the winds of change are blowing strongly. A strong defence in Toronto is critical to the electoral fortunes of Premier Wynne’s Liberals, and the extent of PC or NDP success in the city may ultimately determine the shape of Ontario’s next government.

Why we’re watching: Davenport, long a reliably Liberal seat at both the federal and provincial levels, has become a highly-competitive battleground between the Liberals and the NDP in recent years. The riding turned orange at both levels of government in the 2011 election, but the change was short-lived, with both ridings reverting to Liberal control in the subsequent elections. These rapidly-shifting electoral fortunes are emblematic of the changes occurring more broadly in the riding. Once home to a generation of Italian and Portuguese immigrants, the riding is gentrifying and becoming increasingly diverse, breaking down some of its traditional political affiliations. Martins, who comes from Toronto’s large Portuguese community, rode the strong Liberal tide in 2014 to defeat one-term NDP incumbent Jonah Schein. While Schein opted not to seek his old seat, the NDP was able to secure one of their strongest candidates this cycle to challenge Martins. Marit Stiles has both strong local roots and party profile; she is a current Toronto District School Board trustee and is the former President of the federal NDP. Stiles is an effective and media-savvy campaigner who will be able to draw upon a strong network of support both in the riding and across Toronto. Even if the NDP falter provincially, an NDP victory locally in Davenport may be the first step for Stiles inserting herself in a future conversation about the party leadership in Ontario.

Why we’re watching: Located immediately east of Premier Wynne’s riding of Don Valley West, the riding of Don Valley East is a microcosm of Toronto as a whole. A mix of coveted, leafy suburbs, neighbourhoods of non-descript bungalows and aging low- and high-rise apartment buildings ensure that any MPP will need to be responsive to the riding’s socially, culturally and economically diverse residents. The riding has consistently been very favourable to the Liberals, with only Michael Coteau and his predecessor David Caplan having represented the riding since its creation in 1999. This makes it a bit of an unlikely case for what is shaping up to be the heavyweight match-up between the Liberals and PCs in Toronto. Coteau has been a rising star since his election in 2011. He is the current “jack of all trades” in Premier Wynne’s cabinet, doing triple duty as Minister of Community and Social Services, Children and Youth Services, and responsible for Anti-Racism, and is admired for his political sensibilities, disarming style and reliability. His effectiveness has only increased rumblings about a future at the head of the party ticket. PC candidate Denzil Minnan-Wong, Toronto’s Deputy Mayor and a local city councillor for over two decades, has impressive local and city-wide profile and experience that will present a formidable local challenge to Coteau’s re-election. With the favourable environment for the PCs further boosting Minnan-Wong’s chances, Coteau can expect to expend a lot of energy and shoe leather to keep his seat at Queen’s Park in what is shaping up to be the city’s marquee match-up.

Why we’re watching: Parkdale—High Park has always been a tale of two cities, combining the traditionally upscale neighbourhoods of High Park and Bloor West Village with the working-class and immigrant communities of Parkdale at the foot of the city’s west end. Cheri DiNovo, who retired last year, saw her re-election tallies erode from comfortable leads to razor-thin margins in the span of a decade, despite being a prominent advocate on local issues and an effective legislator at Queen’s Park. The reason has much more to do with the changing demographics of the riding than DiNovo herself. Sky-high housing demand, soaring real estate prices and rapid construction and gentrification have changed the character of traditionally blue-collar neighbourhoods across the riding. As a result, the same geography has become markedly more Liberal-friendly over DiNovo’s decade in office. With her retirement, the NDP will face a very tough challenge to hang on to the seat. Both the Liberal and NDP candidates can draw upon appealing personal stories and a local base of support. Liberal Nadia Guerrera is a teacher with strong party bona fides, and Bhutila Karpoche hails from the riding’s significant Tibetan community and was DiNovo’s executive assistant. With both candidates expected to put on a strong local showing, the final result is likely to be significantly shaped by the battle at the top of the provincial ticket.

Why we’re watching: As the PC Party aims to make inroads in Toronto, they nevertheless face a dogged battle to defend the one seat they currently hold in the 416. Raymond Cho, a former veteran Toronto City Councillor, benefitted from a mix of malaise over soaring energy bills and his own high name recognition to secure a September 2016 by-election win, flipping a seat (in the current and earlier forms) that was securely in the Liberal column since 1985. While Scarborough—Rouge River had seen unpredictable vote swings in recent elections, Cho’s victory nevertheless sent shockwaves through the Liberal ranks. However, the new 2018 electoral map re-drew the electoral boundaries in the sprawling, diverse borough. With the old riding of Scarborough–Rouge River divided between two new districts, Cho opted to run in Scarborough North. That potentially fateful decision means that he is running in an electoral district that includes relatively little of the ward he formerly represented on Toronto City Council. Furthermore, his Liberal opponent is none other than his popular former fellow city councillor, Chin Lee, who has represented most of the new riding as City Councillor for over a decade. Lee also hails from the riding’s large Chinese-Canadian community (Cho is Korean-Canadian). With both candidates enjoying significant local name recognition and a deep reservoir of local support (Cho was also one of only two PC caucus members to endorse Doug Ford’s leadership campaign), it remains to be seen whether community issues or provincial forces will win the day. Perhaps the deciding factor will be the riding’s politically-active Tamil community, who rallied around former NDP candidate and Cho’s successor on Toronto City Council, Neethan Shan. Shan’s election has shown that the Tamil vote can coalesce for the orange team as well.

Why we’re watching: York Centre is at the top of the target list for a PC Party hoping to expand its footprint in Toronto. Once a bedrock of Liberal support, changes in the riding’s demographics and political attitudes have demonstrated its competitiveness in recent years, having been held at the federal level by the Conservatives between 2011 and 2015 before reverting to Liberal control. Retiring incumbent Monte Kwinter is a veritable institution in the riding, having represented it and its predecessor riding Wilson Heights since 1985. His retirement creates a challenge for the incumbent Liberals in a tough election environment. The local race is shaping up to be a contest driven by the riding’s dominant ethnic constituencies. PC candidate and lawyer Roman Baber is expected to have strong support from influential local communities. Born in the Soviet Union, and raised there and in Israel before moving to Canada as a teenager, Baber’s roots and personal story will resonate with the influential Orthodox Jewish and Russian communities in the riding. The Liberal nominee, local realtor Ramon Estaris, hails from the riding’s significant Filipino community. He was able to secure a surprise nomination victory over Louise Russo, a well-known community safety advocate who was seen as a budding star candidate for the provincial Liberals. While the nomination of Estaris is exciting for the local Filipino community, there are questions as to whether Estaris can translate his nomination support into votes at the polls. If York Centre flips to the PCs early on election night, watch out. It could be a rough night for the Liberals in Toronto.