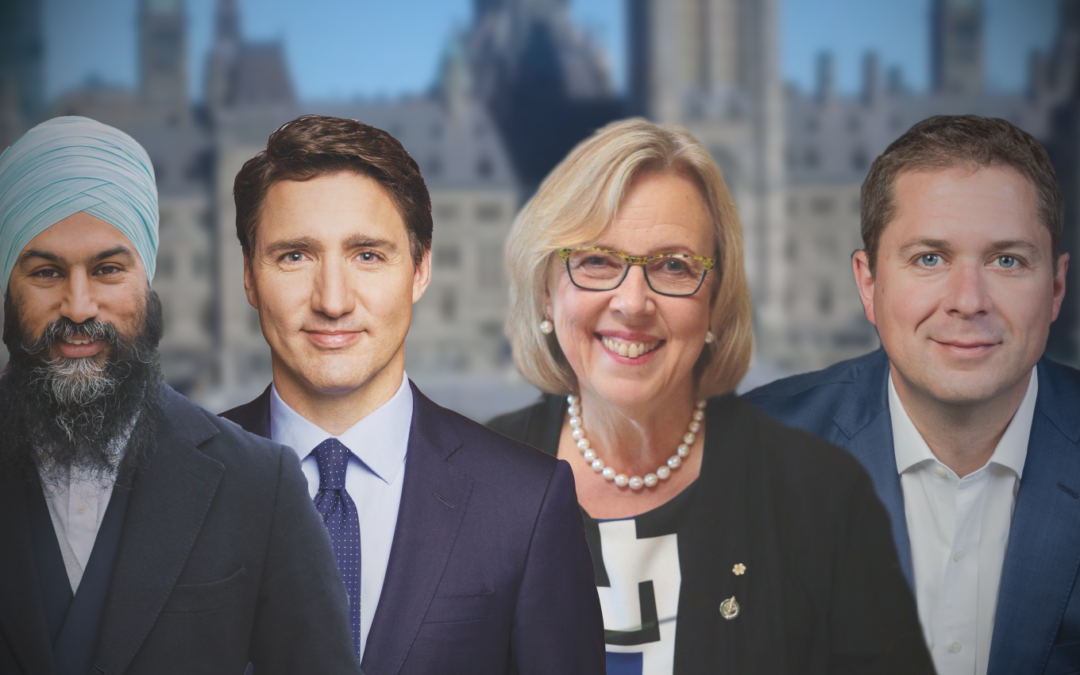 “As long as someone takes responsibility for what they’ve said, and addresses the fact that in 2019 some things that may have been said in the past are inappropriate today, that if anything that they’ve ever said in the past caused any type of hurt or disrespect to one community or another and have apologized for that, I accept that.”

– Andrew Scheer on his candidates’ controversial past statements.

“When I was a kid, I never imagined that someone that looked like me would be running to be prime minister. People told me time and time again the things that I couldn’t do. But now, kids run up and say, ‘Seeing you do this, I feel like I can do anything.’ And that’s inspirational.”

– Jagmeet Singh at his campaign launch

“Let’s separate as soon as possible. If there was a referendum question in Quebec, I would vote yes.”

– Elizabeth May at her campaign launch

Poll aggregators (CBC Canada Poll Tracker, 338 Canada.com) have the Liberals and Conservatives effectively tied nationally, with the Liberals leading in Quebec and Ontario, and the Conservatives dominating in the Prairies. The Greens and NDP are in a statistical tie for third place. This puts the Liberals in within reach of majority territory given the concentration of the Conservative vote in the West.

Among public polls, this cluster analysis from Innovative Research Group caught our eye. Instead of national or provincial polls, they have clustered ridings across Canada based on their historical voting patterns, to show how recent trends could impact the election outcome.  Among the insights:

Abacus Data published an analysis of the voters who will decide the election – the 19 per cent of voters who would consider voting either Liberal or Conservative.

Counsel’s Preview: The high-profile rematch between Liberal MP Nick Whalen and popular former NDP MP Jack Harris will provide a strong signal for the NDP’s chances on election night.  In the 2008 election, all of Newfoundland went to the Liberals except for St. John’s East, which Harris won with almost 75 per cent of the vote. In 2015, Whalen defeated Harris by little over 650 votes.

It is unlikely that controversial legislation like Bill C-69 will have much impact on Newfoundland voters, while new federal funding from the Atlantic Accord and ACOA has been well received. Hanging over the entire province is the disastrous Muskrat Falls hydroelectric project, which has nearly bankrupted the province. It has been bailed out twice with federal loan guarantees but will still gouge ratepayers unless the federal government provides additional rate mitigation – an unlikely scenario. We believe this race will come down to Election Day preparedness and the performance of the NDP and Liberal leaders.

Counsel’s Preview: The Liberals swept all of Atlantic Canada’s 32 seats in 2015 and have nowhere to go but down. Within the region, they are most vulnerable in the anglophone ridings of New Brunswick.

First elected MP for Cumberland-Colchester in 1998, Bill Casey held the seat under multiple banners over the years.He held the seat as a Progressive Conservative and Conservative until 2008, when he won it as an Independent. He chose not to run in 2011 but returned in 2015 as a Liberal, when he defeated incumbent Conservative MP Scott Armstrong with a whopping 64 per cent of the vote.

Casey retired in 2019 and in his place Lenora Zann, a former NDP MLA for the area, will carry the Liberal banner as Scott Armstrong tries to win back his old seat for the Conservatives. Both candidates are well-known to voters so this will be a real test of party preference.

Counsel’s Preview: This traditionally safe Conservative riding was won in 2015 by Karen Ludwig for the Liberals. This election, former MP John Williamson of the Conservatives will be attempting to unseat her in a rematch. In 2015, Ludwig beat Williamson after his first term, a surprise win by around 2,000 votes that was part of the “Red Wave” that carried the entirety of Atlantic Canada. New Brunswick Southwest  is a must-win riding for the Conservatives as they try to rebuild their base in Atlantic Canada. If the Liberals hold onto this seat, it will be a good sign for their campaign across the rest of the country.

Counsel’s Preview: Wayne Long has made headlines for breaking ranks with his own party more than once, voting with the Conservatives to extend consultations on small business tax reform and speaking in favour of the Energy East pipeline. While he has remained in caucus, he was removed from two parliamentary committees. However, these maverick actions may have given Long the local clout he needs to stitch together a winning voter coalition.

Rodney Weston represented St. John-Rothesay for the Conservatives from 2008-2015, making this contest one of the many electoral rematches from 2015. It remains to be seen if Long’s contrarian policy stance will keep the support of enough right-leaning constituents to hold the riding. For the Conservatives to have any chance of forming government, they need to win back ridings like this, overcoming an 8,000 vote deficit from 2015.

Counsel’s Preview: According to Innovative Research Group’s cluster analysis and 338canada.com, Fredericton is a three-way race between the Liberals, Conservatives and Greens. The New Democrats have yet to nominate a candidate as of [September 16]. Popular incumbent Matt Decourcey is facing challenges from local business owner Andrea Johnson for the CPC and Jenica Atwin, an education consultant, for the Green Party.

Elizabeth May hosted a fundraiser with Atwin in July, indicating the Greens’ strong interest in the riding, one of their targets outside of Vancouver Island. Provincially, this riding is uniquely split between three different parties, with MLAs from the Liberals, Greens, and the populist People’s Alliance of New Brunswick. While the Liberals are still favoured to hold the riding, a strong uptick in Green Party support could split the vote in favour of the Conservatives.