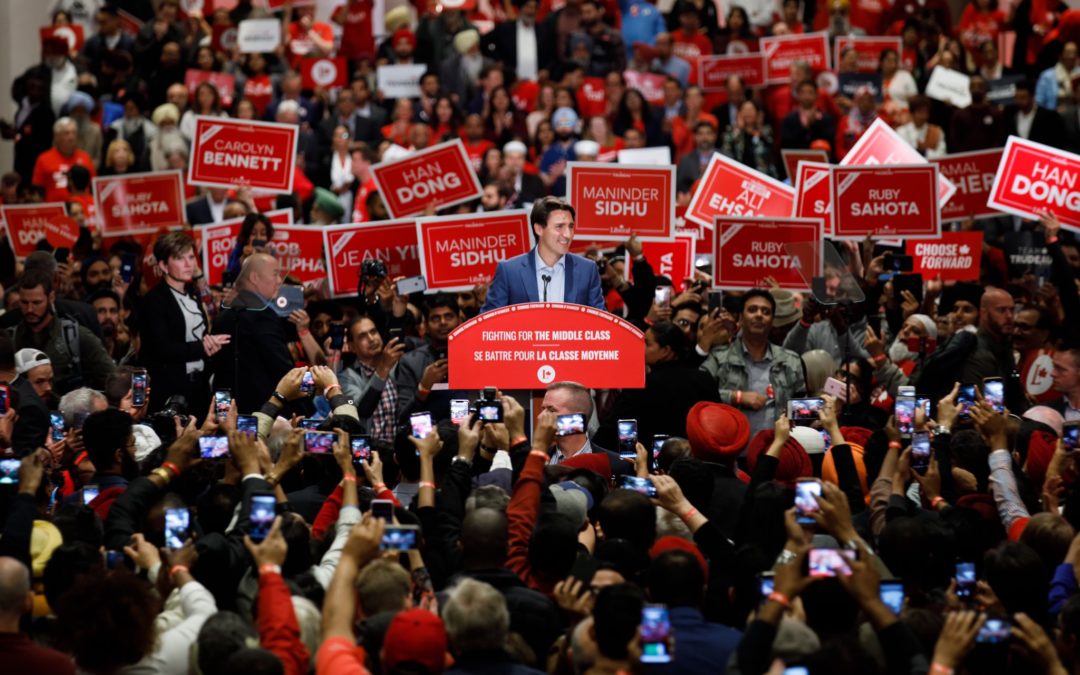 • Justin Trudeau and the Liberal Party, who seemed on the ropes several times over the past six months, have won a solid minority government.
• A fractured Canadian electorate delivered a plurality of seats in the House of Commons to the Liberals, setting them up to form the first minority government in almost a decade.
• While the Liberals came up short of the 170 seats needed for a clear majority, winning 155 seats (at the time of writing), this result is a feat few thought possible leading into election day, after the mid-campaign release of blackface/brownface photos of the PM.
• The Liberals’ victory in the seat count was offset as they lost the popular vote to the Conservative Party of Canada, who secured 122 seats, but took approximately 34.4 per cent of the total number of votes to the Liberals’ 32.9 per cent.
• The Liberals will need the support of one of the other parties (or 14 MPs from multiple parties) for each confidence vote in the House.
• The strength of the Liberal minority makes it highly unlikely there will be a formal agreement with any of the other parties. In all probability, the Liberals will govern in a traditional minority fashion on a vote-to-vote basis (as Stephen Harper did from 2006-2011).
• The NDP won 25 seats, and are set to be a natural partner for the Liberals.
• In the late innings of this campaign, NDP leader Jagmeet Singh showed an openness to making Parliament work by supporting the Liberals, advancing many policy issues where they could find common ground, including pharmacare, social housing and climate change.
• That said, the possibility that the NDP or any of the opposition parties would force an election in the near future will be remote, given the significant financial debts all parties will have following this campaign.
• Despite the overall win, the Liberals lost seats in every region except Ontario, and they hold no seats in Alberta or Saskatchewan, where the Conservatives solidified their presence and the NDP held on. This sets the stage for potentially divisive national debates over energy and environmental policies.
• All parties lost veterans and star candidates, including Ralph Goodale (LPC) in Regina-Wascana, Lisa Raitt (CPC) in Milton, and Guy Caron (NDP) in Rimouski- Neigette-Témiscouata-Les Basques.

How the Other Parties Fared

• Andrew Scheer’s Conservatives improved their share of seats by 27 to 122 nationally, and bested the Liberals in their share of the popular vote.
• However, Scheer’s failure to form government against a party weakened by the SNC Lavalin and blackface scandals will be a disappointment to the Conservative party faithful, and leadership questions may arise.
• Jagmeet Singh and the NDP had both highs and lows on the night. While Singh won over many Canadians with his authentic style of leadership, the NDP suffered an overall decrease in their number of seats from 44 after the 2015 election (39 at dissolution of Parliament) down to 25, with their share of the vote dropping from almost 20 per cent to almost 16 per cent.
• Green Party Leader Elizabeth May won her own seat in BC for the third time and Paul Manley was re-elected. The Greens picked up a third seat in Fredericton, NB, but failed to make the breakthrough they had been hoping for in the rest of Canada.
• The resurgent Bloc Québécois, under leader Yves-François Blanchet, went from 10 seats in Québec to 32, cutting into Liberal, Conservative and NDP seat totals. Blanchet blocked the Liberals’ path to a majority as the main beneficiary of the NDP’s diminishing fortunes in Quebec. Blanchet is poised to become a major national political figure, having demonstrated a tremendous amount of political savvy in this campaign.
• Maxime Bernier’s People’s Party of Canada fizzled out, with the party leader losing his own seat in Québec’s Beauce to his former party, the Conservatives. The PPC garnered less than 2 per cent of the national vote, and will likely be a footnote in history.
• Former Liberal Justice Minister Jody Wilson-Raybould, who left the party over the SNC-Lavalin affair, won Vancouver Granville as an Independent. Fellow Independent and former minister colleague, Jane Philpott, lost to her Liberal opponent Helena Jaczek in Ontario’s Markham-Stouffville riding.