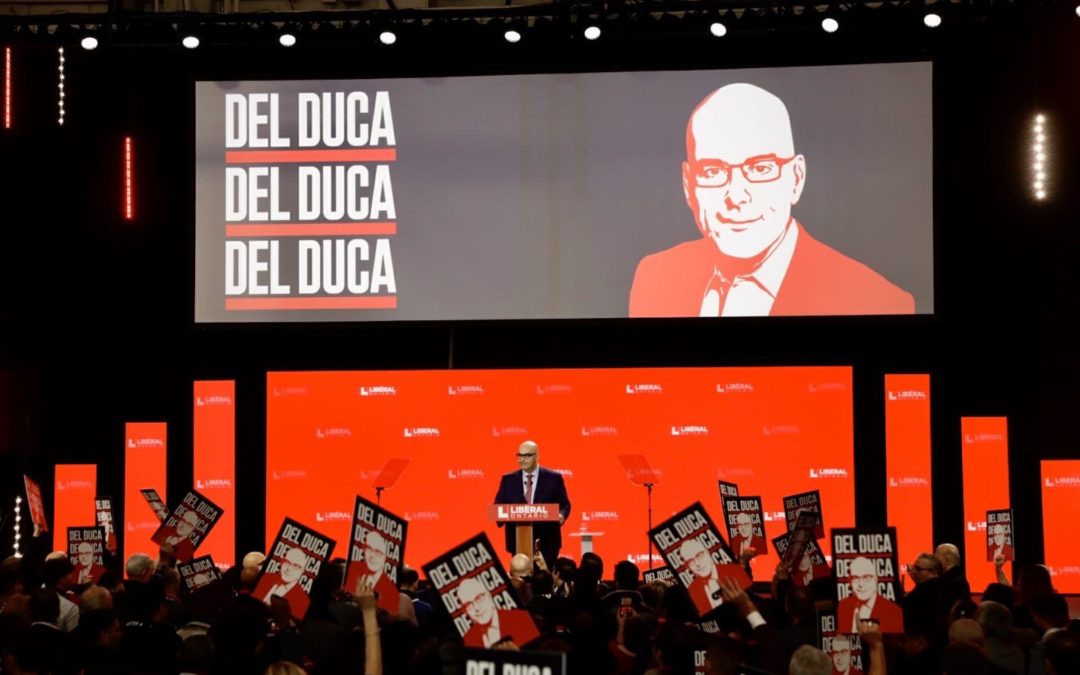 Bob Lopinski’s take on the Ontario Liberal Leadership – Liberals no longer believe the path back to power has to be a six-year project.

Reduced to a caucus that couldn’t fill a mini-van, deprived of Official Party status and deep in debt, provincial Liberals were told to go hang their heads in shame and dream only of the good days behind them.

After attracting a diverse field of candidates to seek its leadership, the Ontario Liberals scored solid wins in two by-elections (albeit in long-time Liberal ridings), attracted a media savvy Francophone MPP to cross the floor to join its ranks, and now the party either leads or is in a virtual tie at the top of most public opinion polls.

And this weekend, the party took its most important step away from the last election and toward the next one.  With the outcome largely pre-determined in votes at the riding level, Liberal delegates from across Ontario gathered, voted and quickly unified behind their new leader, Steven Del Duca.

Del Duca’s impressive first ballot victory is a testament not just to his campaign’s superior organization, but also to the strength of the friendships Steven has built in every corner of the province over three decades of political activity.  More importantly, Del Duca’s victory reinforces a growing belief within the Liberal party that they can actually win the next election.

“We have just 24 months to rebuild and prepare for the next provincial election,” Del Duca repeated at every campaign stop. While two weeks can sometimes be an eternity in politics, two years is not a lot of time to attract quality candidates in over 100 ridings, raise millions in campaign funds, and present a credible public policy alternative to the current administration.

While Liberal thoughts of an election victory will be dismissed by many as wishful thinking given their current standing in the Legislature, it would be a mistake to under-estimate Steven Del Duca. A former Cabinet Minister and former Vaughan-area MPP, Del Duca is smart, articulate, hard-working, experienced, and is as comfortable talking to carpenters as he is to Bay Street bankers and everyone in between. Liberals elected him for all of those reasons, plus the fact that he is a natural organizer and proven fundraiser.

In short, Liberals elected him because they want to win the next election, not just wait for the one after that.

Of course, actually winning in 2022 is far from guaranteed. The financial challenges for the party remain formidable. And for all his strengths, Steven is not what anyone would call charismatic.  But skeptics would do well to recall that similar limitations did not prevent Stephen Harper, Dalton McGuinty, and Mike Harris from succeeding. Indeed, Bill Davis built the most successful Premiership of the modern era on the principle that “Bland works.”

And while the media and pundits are right to hold off on declaring the Liberal Party as the latest political phoenix to rise from the ashes just yet, I can guarantee you the Ford Conservatives and Horwath New Democrats will take the risk of a Liberal comeback seriously.  Both leaders know their political success depends on Liberal failure, and they are prepared to work together keep Del Duca’s Liberals down.

With Andrea Horwarth’s support, Doug Ford has already changed the rules to keep the Liberals from gaining “official party status” and the millions in funding that goes with it.  I wouldn’t be surprised if they work together to try and keep the Liberals out of the televised debate but I trust the networks won’t let that happen.

I am not sure how much any of it matters.  As we saw last week, Joe Biden, who was written off as politically dead, managed to score major Super Tuesday victories without money, advertising and paid campaign staff on the ground.

Bob Rae did the same thing in Ontario 1990, as did Mike Harris in 1995. In 2018, Doug Ford was elected Premier just a few months after becoming his party’s leader.

Of course, critics will say “he doesn’t have a seat.” I think not having a seat is an advantage.  Ask yourself, when was the last time you watched Question Period, or how often you see Andrea Horwath in the news because of a question she asked in the Legislature?

Free of the trappings of Queen’s Park, Steven can travel the province, meet and listen to real people, and avoid the negatives that stick to you when simply chasing the story of the day in the Press Gallery.

Doug Ford told Progressive Conservative Party delegates gathered in Niagara Falls last month that “the 2022 campaign starts today.”  Finally, there is something Liberals, Conservatives and New Democrats can agree on.

Bob Lopinski was on the Ontario Liberal Party’s Steering Committee for the 2020 Leadership Convention, with responsibility for overseeing the leadership candidate debates across the province.