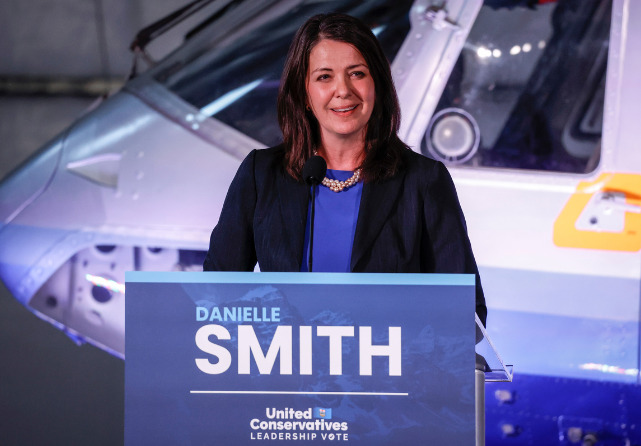 Smith entered the UCP leadership race by throwing a haymaker in the first round.

The Alberta Sovereignty Act set the tone and dominated debate from the outset. This move took any possible momentum away from fellow change-agent Brian Jean and left Travis Toews, Jason Kenney’s former Finance Minister, unable to change the channel. None of the other contenders in the field rose to meet the challenge of Smith’s opening salvo.

Insiders suggest the race was over by Stampede. No developments since July changed who was receiving the largest crowds or the most media attention, and most importantly, who was selling the lion’s share of memberships.  Smith’s decisive victory was punctuated by the most comprehensive get-out-the-vote effort among the campaigns.

Danielle Smith won the leadership on the sixth ballot with 53.7% of the party member’s support.

Smith’s win gives her at least six months to move forward with her priorities, which will undoubtedly focus on her war of words over jurisdictional autonomy with the Trudeau Liberals in Ottawa, as a warm-up to the provincial election in May 2023.

HOW SMITH GOT HERE

Smith’s background offers insight into how she arrived at this point:

Despite her reputation and instincts as a true policy wonk, Smith kept things straightforward on the campaign trail and emphasized a limited number of key items. Her top three priorities will include:

In addition, Smith will enact measures to ensure children are assessed and able to catch up after 2+ years of disruption in schools. Her opening weeks and months are expected to feature a change in government culture (including a shake up in the senior levels of the civil service), with a concerted effort for government to listen and act on behalf of Albertans, not deliver “delays and reports.” Finally, expect plenty of jousting with Ottawa, akin to a return to the tenor of the Klein-Chretien years.

READINESS AND OUTREACH WITHIN THE UCP

Smith’s front-runner status allowed her campaign team to look beyond the contest and prepare for the transition to the Premier’s Office. Expect to see some familiar faces with a smattering of new ones in the staffing and advisor ranks and look for their appointments to be announced very quickly.

Despite media speculation to the contrary, very few “burn it to the ground” narratives have come from Smith’s campaign, or anyone connected to it. Indeed, in recent weeks outreach to key individuals on other leading campaigns have been made by Smith’s team and Smith herself has sought to praise her fellow leadership candidates consistently, noting several have contributed to the policy discussion during the campaign and are likely to be Ministers in her government.

Smith has indicated she will seek a seat in the Legislature at the earliest possibility. This would require a by-election, but it is unclear where she will run. Smith was set to run for the nomination in Livingstone-MacLeod and has said that she would prefer to run there – but thus far there is no indication that current MLA Roger Reid is among the several MLAs who are willing to resign their seat for the next leader. The riding that will be chosen will be a safe conservative riding to ensure a smooth by-election with minimal risk of losing.

WHAT ABOUT THE NDP?

NDP leader Rachel Notley will attempt to cast Smith as out-of-step with mainstream Albertans – especially those in Edmonton and Calgary. With the UCP and NDP running neck and neck in the polls, many think the election of Smith will open the door for the NDP to regain the lead and ultimately win the May 2023 election.

Notley’s track record, much like Smith’s, features reason for optimism and concern. Notley’s victory came while Alberta’s political right was split, and she was facing Jim Prentice and Brian Jean – neither of whom could be described as charismatic – and Notley took advantage. Notley will continue to benefit from the moribund status of both the Liberals and Alberta Party – neither having discernible signs of life at this stage.

The Alberta NDP are now much more experienced and well-known throughout Alberta than before their victorious 2015 election. Today, it is not unheard of for voters to switch between the NDP and UCP. Notley can use this familiarity to her advantage, as her voter acquisition “costs” won’t be quite so high in terms of educating Albertans about the party.

Notley will seek to seize on any missteps made by Smith’s government and continue to reassure Albertans that the NDP is a government-in-waiting that would speak to the concerns of everyday Albertans. Look for Notley to be critical of Smith’s focus on jurisdictional fights with Ottawa at the expense of meaningful headway on issues such as costs of living and health care.

THE ROLE OF THE ECONOMY AND BUDGET SURPLUSES

The economy will surely play an outsized role in the fortunes of all of Alberta’s political leaders. Inflation, a higher cost of living, spiking energy prices and supply chain challenges are expected to continue and possibly worsen over the coming months. Incumbent leaders are vulnerable to these situations if they are not perceived as responding adequately.

The end of Premier Kenney’s time as leader has seen surging energy revenues and a return to surplus in Alberta – allowing for a whopping debt repayment and shoring up some key programs. If this fiscal reality continues, it is likely to benefit the incumbent UCP, allowing them to offer tax breaks, targeted spending and reducing debt. The NDP will counter Smith’s agenda with a focus on new investments in health care, education, seniors benefits and measures to lower the cost of living.

If the economy rollercoasters back into deficit and struggle – all bets are off.

Counsel Public Affairs’ multi-partisan team has all the angles covered when it comes to public affairs in Alberta, and beyond. If you have questions or need help making your voice heard, reach out to us today!