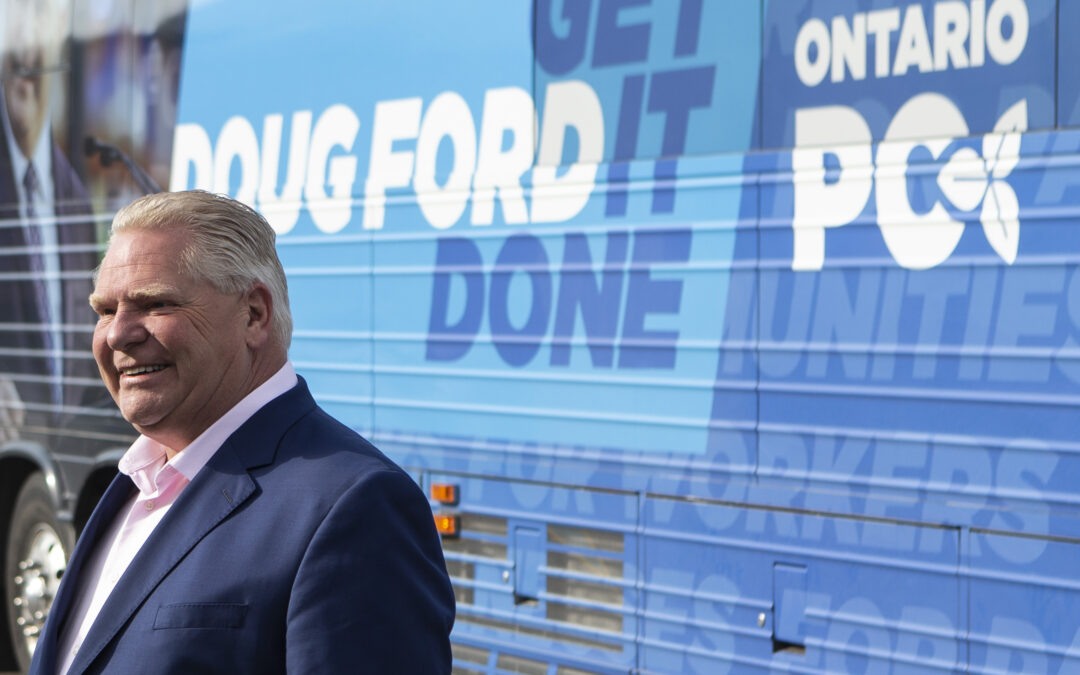 May 31, 2022 – With voters heading to the polls in just two days, a new public opinion poll by Counsel Public Affairs suggests that Doug Ford’s Progressive Conservatives remain on track for re-election to a second majority government mandate. The PCs currently have the support of nearly 40% of voters, having picked up close to three points since Counsel’s last poll on May 18th.

While Liberal and NDP support has fallen slightly, the Green Party has gained one point since Counsel’s last poll. Mike Schreiner’s impressive debate performance and the party’s effective campaign look set to maintain and grow their share of the vote – and perhaps even their seat count.

Meanwhile, the New Blue and Ontario Party have had little impact on the campaign. With some possible exceptions, the presence of these parties has not influenced the messaging, turnout or strategy of this campaign, but simply masked some support that would otherwise go to the PCs.

“This data suggests that the question is not if the PCs will form a majority government, but rather who will end up forming the Official Opposition”, said David Murray, Counsel’s Senior Manager for Federal Advocacy and Polling.

The Progressive Conservative lead is broadly-based. Across almost all demographic groups (age, education, visible minority), the PCs are either tied or winning. The party has maintained a plurality of support with every male and female age group, except for young females aged 18-34, as well as a consistent level of support among visible minorities and all levels of education.

The only area of significant gap for the PCs is with younger, female voters. Support among this group is split three ways (25 Lib; 33 NDP; 26 PC). If the NDP can consolidate some of that vote from the Liberal and Green parties, they may be able to turn a few seats.

It is also worth noting that given greater voter turnout among older voters, Ford’s significant lead among 55+ voters (48% among men; 42% among women) could translate into an even larger lead on election night.

A key factor in the PC’s lead has been their ability to retain strong support in Suburban Toronto and across all regions of the GTA. While the expressed support for both opposition parties has fallen since Counsel’s last poll, the Liberals appear to face greater disappointment, having lost support in key regions where they hope to gain ground, such as Peel, Hamilton/Halton, and Central Toronto.

While NDP has lost some support provincially, they are continuing to hold or have modestly improved in key battlegrounds such as Hamilton, Central Toronto, and Northern Ontario. These modest improvements may make the difference in their ability to maintain their Official Opposition status.

Overall support for the Liberals and NDP has fallen by two points each since Counsel’s last poll. For voters eager for change, it appears the opposition parties have failed to provide a compelling alternative – in part due to a failure to meaningfully distinguish from each other in a way that resonates with persuadable voters. Rather than a voting shift between the Liberals and NDP, a share of soft supporters have left the opposition camps to back what may seem like the winning horse: the PCs.

“Elections are won and lost on a riding-by-riding basis, with many contests dependent on local voter identification and get-out-the-vote hustle,” concluded Murray. “Keeping volunteers motivated as we close out this election campaign could make the difference.”

The full summary of findings and analysis from Counsel’s poll can be found at counselpa.com/counsel-research.

Counsel surveyed 2,411 Ontarians over the period of May 27 and May 28, 2022 using the Lucid Exchange Platform, which blends a variety of partner panels. The margin of error for a comparable probability-based random sample of the same size is +/- 2.0 percent, 19 times out of 20. Results were sub-regionally weighted to the 2016 Census for age, birth sex, and education, along with 2018 provincial vote.

For media inquiries or further discussion of findings, contact: