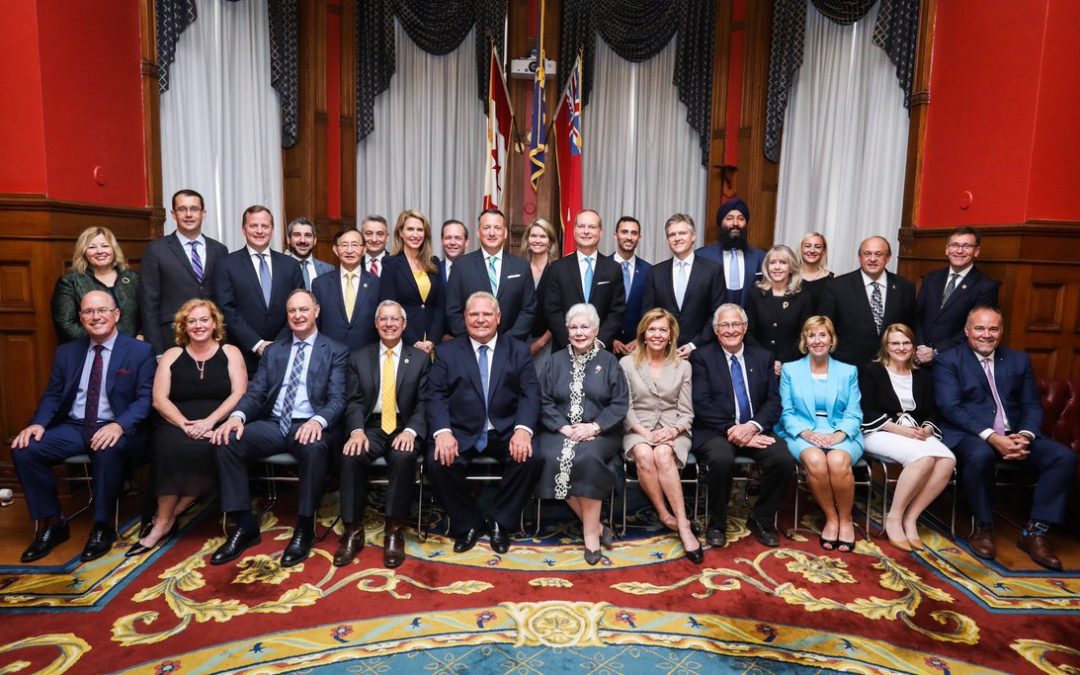 Ending weeks of speculation, today Premier Doug Ford announced a reset of his government with the most significant Cabinet shuffle in modern Ontario history. Today’s shuffle included some of the most important portfolios and people in government, with only eight Ministers unchanged.

While the Ford government had successes implementing its agenda over its first year, it also faced many challenges across a number of ministries and in the court of public opinion. Today’s changes send an important signal that the Premier knows his team must do a better job communicating and implementing the changes that won them a majority government just one year ago.

Rod Phillips was named the Province’s new Minister of Finance replacing respected Nipissing MPP Vic Fedeli who becomes Minister of Economic Development, Job Creation and Trade. A change in the finance portfolio this early in a government’s mandate is unprecedented. Minister Phillips was widely seen as a strong performer at the Ministry of Environment, Conservation and Parks and brings significant business and political acumen to the Finance portfolio. The Finance portfolio is likely a reward for his handling of the carbon tax issue and rolling out the PCs’ environment plan. Fedeli remains Chair of Cabinet, an important role, which signals his stature within the government and party.

In a surprising move, Caroline Mulroney shifts to Transportation, with Doug Downey, a lawyer by trade, taking her place. Downey leapfrogs from Parliamentary Assistant to the Minister of Finance to become the Attorney General. Mulroney remains Minister of Francophone Affairs.

With contract negotiations with teachers’ unions rapidly approaching, Ford is choosing to bring in Stephen Lecce as Education Minister. Lecce is a rising star who has proven to be very capable as the Parliamentary Assistant to the Premier and Infrastructure, to deal with what is likely to be a frosty bargaining environment. Minister Lecce becomes one of the youngest senior Cabinet Ministers in Ontario’s history at the age of 32 — despite his youth, Lecce has a rich background of experience as Director of Media Relations to former Prime Minister Stephen Harper. Lisa Thompson, who faced major backlash from school boards, teachers, students and parents during her tenure as Minister of Education, becomes the Minister of Government and Consumer Services, while Bill Walker is shuffled from that portfolio to a newly created position as Associate Minister for Energy.

Todd Smith, a seasoned communicator and well-liked Minister, takes over the Ministry of Children, Community, and Social Services from Lisa MacLeod. MacLeod moves to the less heated portfolio of Tourism, Culture and Sport, while Michael Tibollo becomes Associate Minister for Mental Health and Addictions, a portfolio created that mirrors those newly-created in BC and Alberta to address the opioid crisis. Smith’s skills will be tested, as the high-profile and complicated autism and disability files have historically been tough for every minister with this portfolio for almost two decades.

Ross Romano’s appointment to Cabinet brings another Northern Ontario voice to the table and signals a hopeful shift in relationships with key stakeholders at the Ministry of Training, Colleges and Universities. Romano replaces Merrilee Fullerton, who moves to the newly separated Ministry of Long-Term Care — likely a welcome change for Fullerton, who is a medical doctor.

Coming off a successful run as Minister of Transportation, Jeff Yurek takes over Rod Phillips’ former role as Minister of Environment, Conservation and Parks.

The list of who remains in their portfolio is much shorter than who has been shuffled. Those staying put include:

The shuffle also makes room for a number of newcomers to Cabinet. With a backbench eager to move up in the ranks, and a clear desire to put fresh faces on the government’s agenda, several caucus members are elevated to the inner circle, with some catapulted into high-profile ministries. In addition to Downey, Lecce and Romano, Paul Calandra, a former MP, becomes Government House Leader. The creation of some new Associate Minister positions helps to include new blood:

With these changes, the Cabinet grows from 21 Ministers to 28, with no Ministers shuffled out of Cabinet.

WHAT DOES IT MEAN?

With summer approaching, timing couldn’t be better for the government to reflect and adjust its approach to a number of hot button issues. With the legislature not in session until after the federal election, the shuffle gives Ministers plenty of time to learn their new portfolios and meet with key stakeholders. Which staff members will stay in their current positions or move along with their Ministers will be decided by the government in the coming days.

What is unknown is whether the changes, particularly in Finance, signal a change in policy direction, or simply the hope that new faces can better communicate the existing agenda. With several months until the Legislature resumes, the government has time to decide.