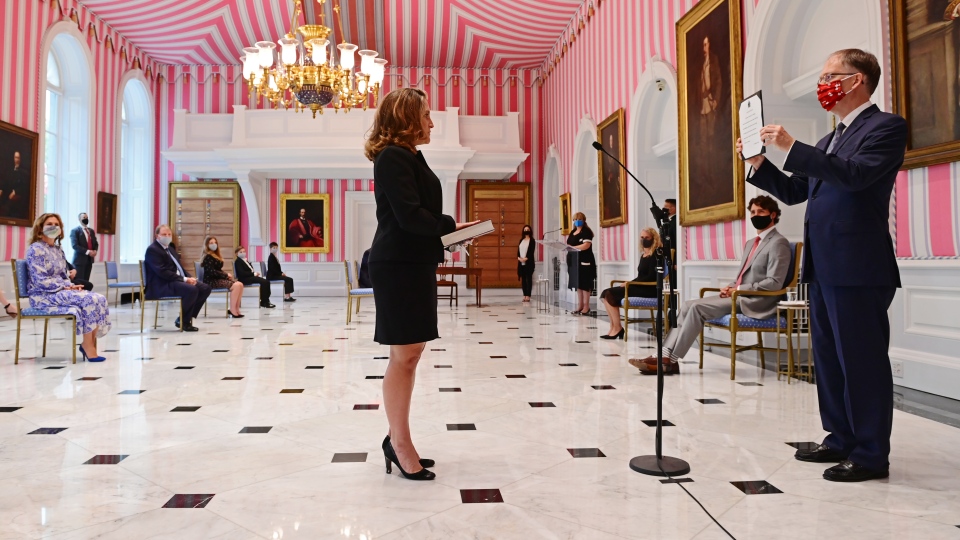 Chrystia Freeland’s star is shining brighter than ever today as she was named Finance Minister in Justin Trudeau’s Liberal government, making her the first woman to ever hold this prestigious post. After distinguishing herself in previous roles, particularly her handling of the NAFTA renegotiations, she is now charged with developing the fiscal plan to guide the country out of the economic doldrums brought on by COVID-19.

Most recently, Freeland coordinated the federal-provincial-territorial response to the pandemic, earning praise from Premier Doug Ford, an unlikely admirer who today said of her move to Finance, “There’s no one that would be better in that role than Chrystia Freeland.” Her new assignment as Finance minister will include addressing weaknesses in long-term care, child care, and healthcare which have been highlighted by the COVID-19 crisis – all issues which require federal and provincial cooperation.

While she retains the Deputy Prime Minister title, her Intergovernmental Affairs duties have been assumed once again by Dominic LeBlanc, who has recovered from a recent bout with cancer. LeBlanc is a longtime, trusted confidante of the Prime Minister with astute political instincts who will help the government navigate choppy waters over the coming months, as the sense of national unity brought on by the pandemic gives way to more familiar patterns in a pre-election environment.

Today’s Cabinet mini-shuffle, filling the void left after yesterday’s resignation by Bill Morneau, comes as Prime Minister Justin Trudeau unexpectedly announced this afternoon that Parliament has been prorogued until September 23, at which point a new Throne Speech will be delivered. With the House prorogued, most legislation “dies” and committee work comes to an end — leading the opposition to charge that the government is halting further investigation into the WE Charity scandal.

The Prime Minister has framed his decision to prorogue as a necessary reset of the government’s agenda, calling the pandemic an “unexpected challenge with unprecedented opportunity.” A new Throne Speech seems fair given the upheaval of the country’s economic and social frameworks over this past year – although the lengthy prorogation will raise questions.

The Throne Speech will be followed by a confidence vote, allowing the government to recast their mandate to rebuild the economy, while likely offering up concessions to win the support of the NDP and Bloc Quebecois, their minority government dance partners.

Expect the government to use the Throne Speech to take a more progressive approach on programs like child care or Employment Insurance, whose limitations have been exposed by the pandemic. The Prime Minister says he intends to present a plan which will “rebuild a fairer and more resilient Canada.”

With no signs of a formal budget process underway within government, it is likely that a Fall Economic Statement will precede a full budget in the spring. This next budget is likely to be an election trigger and could be a detailed proxy for the next Liberal election platform. The opposition parties will be wary of pulling the plug sooner, with a brand-new Conservative leader and the country facing a potential second wave of COVID-19 this fall.

The appointment of Freeland as Finance Minister casts Morneau’s resignation in a new light. The Prime Minister has determined that the Liberals need Freeland’s star power to present an ambitious and progressive recovery plan that will be key to winning a third mandate. This government has also been quick to acknowledge the disproportionate effects the pandemic has had on women, and the country’s first woman Finance minister will be well-placed to address these inequalities.

The Trudeau-Freeland partnership is now a key dynamic at the heart of this government, and will continue to fuel speculation that Freeland is poised to inherit the Liberal leadership whenever Trudeau chooses to depart.