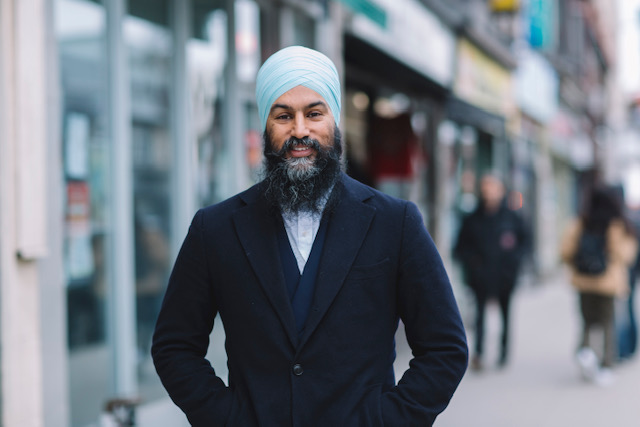 Welcome to the NDP edition for our 2019 Federal Election blog series! So far, we’ve looked at Andrew Scheer and the Conservatives, Justin Trudeau and the Liberals, and we will be looking at the other parties next week.

Jagmeet Singh has had a busy summer, travelling across the country to introduce himself to Canadians in the lead-up to the federal general election on October 21.

Elected leader of the New Democrats with over 53 per cent on the first ballot in October 2017, Singh worked to build street-level profile outside of the House of Commons before his election as Member of Parliament for the British Columbia riding of Burnaby North in February of this year. Despite this effort, and the profile gained from serving as a Greater Toronto Area MPP since 2011, Singh’s visibility remains much lower than that of his predecessors Jack Layton and Tom Mulcair, and well below that of his Liberal and Conservative opponents in this election. The public currently has neither a positive nor negative impressive of the NDP leader, a position that confers some advantages in the campaign to come.

Following in the footsteps of giants like Layton and Mulcair, and facing a discouraging narrative about low polling support and the retirement of veteran MPs, it’s easy to dismiss Singh’s leadership and the NDP’s prospects. But in volatile times, with voters turning against status quo parties, and the NDP’s long-standing skill at leveraging growing disappointment among Liberal voters, it’s far too early to discount the NDP’s chances in this election.

The NDP is back to pre-2011 levels of voter support – that is, in the mid-teens –  though according to Abacus research released earlier this summer, more than four in 10 of all eligible voters are open to marking a ballot for the NDP. The NDP is the second choice for 42 per cent of current Liberal voters and 38 per cent of current Green voters. Combined, this creates a significant opening for Singh’s NDP to pick up support in what is expected to be a volatile and bruisingly negative campaign.

Most significantly, this is not a good time to be a party of the status quo. Across Canada and around the world, voters are rejecting the business-as-usual approach to politics and looking for bold new ideas and alternatives – in July, Ipsos reported 67 per cent of Canadians say it’s time for a new party in Ottawa. With considerable negatives sticking to both the Trudeau Liberals and the Scheer Conservatives, and with expectations set very low, the NDP are poised to catch the updraft of the campaign’s sudden shifts. If the progressive vote were to break for the NDP during the election, it would radically alter the political landscape.

Who is the NDP focused on?

With its new slogan “In It For You,” the NDP intend to focus on disaffected Liberals who believe Justin Trudeau has failed to live up to progressive promises from 2015, as well as their traditional base of support in working-class neighbourhoods. Being the first person of colour serving as a federal party leader, Singh gives the NDP inroads into areas of non-traditional strength – specifically the 905 regions in Ontario, including Brampton, Mississauga and Scarborough. With a solid beachhead in BC’s Lower Mainland, Singh’s leadership on environmental and housing issues – and Trudeau’s weaknesses on the same – will give the NDP a leg up in vote-rich Metro Vancouver.

Singh’s target coalition will include young voters, women, and second- or third-generation voters who see their immigrant story in Singh. A hard-working first-generation Canadian lawyer speaks to many Canadians from coast to coast to coast. Singh was catapulted on the federal scene through a convincing first-ballot win during the NDP leadership race thanks to the street-level support that he has worked hard to cultivate since his time as deputy leader of the Ontario NDP. This suggests the NDP has support in areas that haven’t traditionally backed the New Democrats and demonstrates a desire to expand the base while also remaining true to its progressive roots.

What policies have the NDP announced so far?

In mid-June, Singh released the NDP’s 109-page election platform at an event in Hamilton. This was done to equip NDP candidates and volunteers with material for substantive and meaningful contact with voters on the doorsteps over the summer. The platform itself is the embodiment of the progressive positioning the NDP will embrace in the campaign. Entitled “A New Deal for People,” its target includes 2015 Liberal Party supporters who are now disappointed with lack of progress on climate change, housing, affordability and integrity. Among the commitments were:

What are their strengths and weaknesses?

Among the NDP’s strengths is an increasingly progressive, young New Canadian population that is not happy with the status quo. The ability to set ambitious goals – then actually deliver on these promises – appeals to many in Canada. This is the combination Jagmeet Singh used to win the NDP leadership race, and this is the coalition he is seeking to build in this election.

The NDP has to expand its coalition from 2015 if it hopes to pick up more seats than in its traditional strongholds. Their advantage is their highly motivated group of volunteers and a large number of disaffected voters they can appeal to in order to secure more seats.

As the NDP roll out increasingly more progressive positions, they make it harder for the Liberals to outflank them on the left. If the Liberals then position themselves as centrists, the incumbents risk losing many voters they managed to get in 2015, including the important millennial vote.

The NDP is weakest on fundraising and Singh’s relatively low visibility. Without resources, it will be difficult to get him into communities to grow his brand. The NDP are expert organizers but time is running short for raising money and increasing his profile.

Perhaps most importantly, the apparent collapse of NDP support in Québec creates a huge risk for the party. Current polls show the NDP in fifth place in the province with single-digit support. While Jack Layton turned around similarly low numbers in 2011 to soar to 43 per cent support, this dropped to 25.4 per cent in 2015 under Tom Mulcair, and support now appears in freefall. Short of a dramatic resurgence, the challenge will be to hold any of their 15 seats in the province.

What is the range of outcomes?

It’s very true that campaigns make a difference, and many observers expect Singh and the NDP to exceed low expectations and draw sufficient support from disaffected voters to deny the Liberals a return to a majority government, leaving the NDP the option of supporting a Liberal minority through a power-sharing agreement. Should that transpire, a formal coalition would be unlikely, but expect to see the NDP push a Liberal minority to the left on issues like climate change, affordable housing, energy development and health care.

Readers may remember the 1985 Rae-Peterson agreement, which eventually led to Ontario NDP leader Bob Rae winning the 1990 election. More recently, former federal NDP leader Jack Layton skillfully navigated minority partnership with the Liberal government of Paul Martin to win substantial concessions on corporate tax rates and infrastructure spending, ultimately growing the NDP’s support while the Martin Liberals declined. For the NDP, a minority government is both an opportunity to deliver legislation to benefit its base of support and a chance to position itself for the next electoral contest.

What does the NDP need to do in each region?

With the Trudeau Liberals on the retreat from their 2015 gains across Western Canada, Singh’s NDP aims to pick up progressive supporters looking to make their vote count.

Trudeau’s track record on the Trans Mountain Pipeline and First Nations reconciliation after his falling out with Jody-Wilson Raybould has alienated a lot of Liberal support in urban ridings. The NDP’s position on both of these issues, combined with a provincial NDP government that is very popular in the Lower Mainland and Vancouver Island, could massively expand the battleground territory for the NDP.

Singh’s convincing leadership convention win was built on support from BC but primarily from Ontario, where he saw first-time NDP member sign-ups and votes in places such as Brampton. If Singh appeals to new Canadian communities across the 416 and 905, many ridings that flipped to the Liberals in 2015 could potentially shift to the NDP, increasing their chance at holding the balance of power after October 22.

Québec will be the toughest nut for the NDP to crack again. Strong Liberal support, an unexpectedly resurgent Bloc and the NDP’s Ontario/BC-based leader could combine to spell trouble for their Québec-based MPs. On the other hand, the NDP have many popular Québec MPs, including leadership runner-up Guy Caron and notable MPs Alexandre Boulerice and Ruth Ellen Brosseau. Given the high profiles of the existing caucus members in each of their ridings, many three- or four-way races could be swung due to personal popularity.

The Liberal sweep of Atlantic Canada in the last election creates some potential pick-ups for opposition parties. The NDP has always had a difficult time cracking the two-party horse race of the first-past-the-post system in Atlantic Canada, and have suffered a defection of 14 New Brunswick candidates who ran in the last provincial election to the federal and provincial arms of the Green Party this week. However, some of the most popular and longest-serving NDP MPs have hailed from the region. In this election the NDP will likely be focusing on two ridings: St. John’s East and Halifax, as the NDP try to form two beachheads in Atlantic Canada to regrow the party there.

The success of the NDP campaign will depend upon where its support is concentrated. If it’s focused in highly competitive regions such as the Lower Mainland of BC, the 416 regions Brampton, Montreal, and other traditional strongholds, the NDP could swing several seats on election night. If so, it will be at the expense of the Liberals and could force them into a minority government situation. Like Jack Layton, Singh would use this valuable position to build his relationship with the electorate and grow support for future elections.

Singh’s political career is one of multiple firsts: the first NDP politician elected at any level in Peel Region (comprised of Mississauga, Brampton and Milton, Ontario – just east of the City of Toronto), and the first racialized person to be elected federal leader of a political party.

The volatile electorate in this campaign could grant him a significant position of authority after election day even if the total party vote support and/or seat count are reduced. It will be smart to keep an eye on Jagmeet Singh’s NDP. 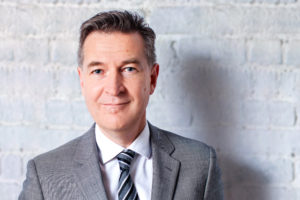 David Bieber has over 20 years of communications, government relations, and political experience. He has worked with civic, provincial and federal political leaders, labour unions in B.C. and political parties in Europe, Asia and the Middle East.David worked for the BC New Democratic Party for twelve years, serving six of them as Director of Communications. He played a key role in the historic 2005 comeback for the Party. Prior to joining Counsel, David served as the government relations director of the Health Sciences Association, a British Columbia union representing over 18,000 highly-trained members working at every level of the health care system