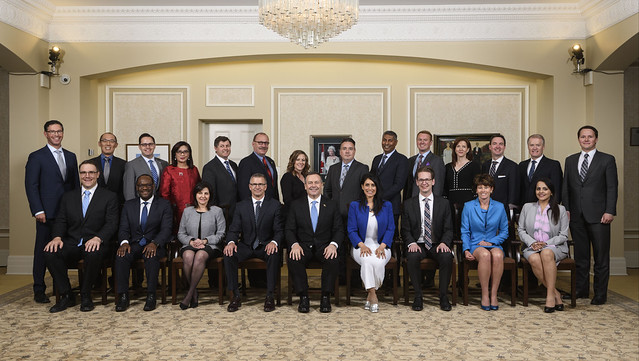 The new players in the Alberta government

Premier Jason Kenney’s top priorities of jobs, pipelines and the economy drove the composition of his new 23-member cabinet, sworn in yesterday. The Premier’s front bench includes new portfolios such as Red Tape Reduction and Natural Gas that both increase the number of ministers, and signal his top priorities.

A wide range of experience is represented in cabinet, with a front bench made up of business owners, academics, energy professionals, teachers, a musician, farmers, and lawyers. The cabinet is a mix of experienced politicians and first-time elected officials, and notably, it’s also a very young cabinet, with an average age of just 43.

The Premier will also serve as the Minister of Intergovernmental Relations, signalling the importance of provincial and federal government affairs ahead of October’s federal election.

Cabinet Ministers are expected to receive detailed mandate letters that closely reflect the United Conservative platform, but they are not yet public. The UCP laid out a detailed 375-point suite of policy proposals on the campaign trail, and now feel they have a strong mandate to deliver on these promises — it’s likely that the mandate letters will closely reflect those policies.

Minister Savage was the first to get to work in a public way, attending the Senate’s Standing Committee on Transport and Communications with the Premier to speak out against Bill C-48, the proposed federal tanker ban on the west coast. Minister Savage, who is highly regarded by her former oil and gas colleagues, also held a joint press conference with the Premier to proclaim Bill 12: the turn-off-the-taps law, which would allow Alberta to restrict oil and gas shipments to BC.

Minister Shandro was a practicing lawyer who served on many prominent boards including The National Parole Board and the Municipal Government Board. His leadership on uniting the conservative parties, combined with his experience as a seasoned campaigner has earned him a stellar reputation in the conservative movement. He has been given what is often viewed as a challenging portfolio, despite limited experience in health care issues — this should be viewed as a vote of confidence.

Jason Nixon, Minister of Environment and Parks and House Leader

Minister Nixon, a key member of Jason Kenney’s inner circle and experienced MLA, will continue to be a trusted confidant of the Premier. During the election he spent much of his time managing issues and assisting fellow candidates province-wide. As House Leader he will be responsible for the setting the ambitious legislative agenda of the government and will play an important role as Environment Minister in the government’s fight against the Trudeau government’s carbon reduction policies including its carbon tax.

On April 22, senior staff leading the transition team were named:

The team includes a mix of experienced political staffers and trusted advisers of the Premier. The transition team is tasked with staffing up the government, and nearly 150 positions are currently being filled.

The Premier’s office is handling the hiring of Chief of Staff and Press Secretary positions. Ministers were introduced to their current staff (if hired) in the early afternoon following the swearing-in of cabinet.

Other UCP MLAs will be sworn in and a Speech from the Throne will be delivered following the May long weekend. It is anticipated that the first legislative session will run until the end of July.

We can expect at several pieces of legislation in the first spring-summer sitting. The UCP are calling the months ahead, “the summer of repeal,” where they will work to remove what they consider harmful regulations enacted by the NDP and will go further in freeing business owners of onerous red tape and regulatory requirements.

Bill 2: The Open for Business Act presents a strong opportunity for stakeholders to get involved. With Grant Hunter being appointed as the Associate Minister for Red Tape Reduction, there is the ability to present ideas across government that will reform the regulatory environment and ease constraints holding industry back. It is interesting to note that this sentiment matches the policies enacted through Premier Doug Ford’s Open for Business Act in Ontario.

Premier Jason Kenney will be appealing directly to Canadians in other regions to build support for their pro-jobs and pipeline priorities. He is heading to Ottawa to speak out against a federal bill on pipelines before the Senate, in what is expected to be one of many showdowns with Prime Minister Trudeau. On May 3rd, Premier Kenney will deliver a speech at the Canadian Club Toronto and in interviews with Quebec media has suggested he would tour regions in eastern Canada to help drum up support for pipelines.

Changes in the bureaucracy

Premier Kenney and his cabinet have announced the members of Deputy Minister’s Council. Full biographies can be found at alberta.ca/deputy-ministers-council

The following senior officials have been appointed:

For more information on what this means for your organization, please contact Amber Ruddy at aruddy@counselpa.com or 403.472.1136

Amber is a dynamic and seasoned government relations and communications practitioner with over 7 years of experience in business advocacy at both the provincial and municipal levels. Her experience includes working for a federal Conservative cabinet minister, and as the Canadian Federation of Independent Business, Director of Provincial Affairs for Alberta. She was an active volunteer on local campaigns for the UCP.