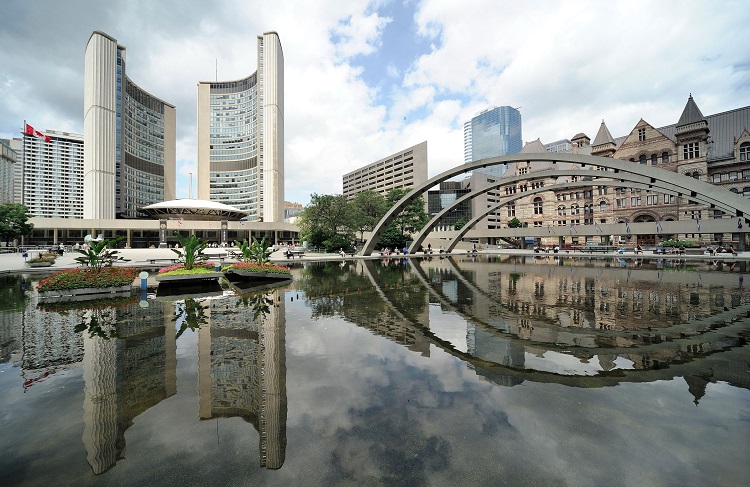 We’re wrapping up our election preview with Toronto’s remaining seven wards. Comprising downtown and much of the old City of Toronto, this is home turf for most of City Council’s left-wing bloc. Swept by the NDP in the June provincial election, they represent the strongest base of support for Jennifer Keesmaat’s mayoral bid. This fact is not lost on the Keesmaat campaign, who’ve focused much of their attention on issues that resonate with these residents: overburdened transit, city-building opportunities, and a strong check on Premier Doug Ford. Amidst retirements, and despite a few high-profile challengers, these wards are expected to return a largely familiar set of incumbents to City Council.

The decision by incumbent High Park councillor Sarah Doucette to not seek re-election has put council firebrand Gord Perks in the pole position to represent the new Ward 4. A seasoned activist, Perks has consistently demonstrated a talent for getting – and keeping – his priority issues on the public radar. He’s being challenged by several worthy contenders, including community activist Kalsang Dolma and local restauranteur David Ginsberg – both of whom hail from the Parkdale community as well. But High Park – representing half the combined ward and new turf for Perks – remains the wildcard. With no high-profile High Park candidate in the race, will Perks’ city-wide reputation help him make a strong showing here as well?

This was the race that was, and then wasn’t. Under Toronto’s anticipated 47-ward council, redrawn boundaries in the Davenport area pitted incumbents Cesar Palacio and Ana Bailão against each other in the only race where two sitting councillors were expected to face off. Enter Doug Ford. The decision by the provincial government to consolidate the size of council still saw the two incumbents facing off, but in a larger ward covering the entirety of both their current districts (the 47-ward model was somewhat more favourable to Bailão). Exit Palacio, who quietly withdrew from the race in late September, leaving Bailão with a clear path to re-election. Welcome news for Bailão, an influential centrist and swing vote on council, following a closely-won re-election in 2014.

The more things change, the more they stay the same. With several of the combined wards cutting across multiple existing wards, the left-of-centre incumbents have largely co-ordinated to avoid running against each other. Incumbent Joe Cressy, former assistant to Olivia Chow and one of the left’s rising stars, will run against a plethora of challengers to represent the western half of downtown and City Hall itself. He has built a notable local and media reputation in just his first term that should foreshadow his re-election. All this comes naturally to Cressy – the son of not one but two former Toronto councillors. His strongest challenge comes from Kevin Vuong – a city-builder and naval officer who was one of two Canadians honoured by Queen Elizabeth II with the Queen’s Young Leaders award last year.

Another downtown ward that spans wards currently held by several incumbents, the new Ward 11 should be an early call on election night. Mike Layton, son of former Toronto Councillor and Federal NDP Leader Jack Layton, has represented the western portion of this ward for the past four years. He’s drawn a very slim slate of challengers, none of which is likely to pose a significant obstacle to his re-election. Layton’s biggest challenge has – and will be – introducing himself to thousands of new residents across the ward, two-thirds of which is new territory for the incumbent. The Layton name should be an effective ice breaker.

There’s just something about Toronto Centre that makes it irresistibly magnetic to those seeking elected office. The new ward has attracted no less than 19 candidates for its council seat. Leading the way are incumbents Kristyn Wong-Tam and Lucy Troisi, as well as former mayoral candidate George Smitherman, who represented Toronto Centre at Queen’s Park for 13 years. In her eight years on council, Wong-Tam has become one of the most influential left-of-centre councillors while earning wide plaudits for her effectiveness and pragmatism. Signs show that it is translating into support at the ballot box. Two polls have shown Wong-Tam with a solid lead over Smitherman, with appointed incumbent Troisi well behind. Should Wong-Tam win a convincing re-election, speculation about a 2022 mayoral bid won’t be far behind.

Toronto-Danforth is the only seat where two incumbent councillors traditionally associated with Council’s left-of-centre bloc are going head-to-head. Paula Fletcher and Mary Fragedakis are both experienced, multi-term incumbents, with Fletcher in particular being one of the informal caucus’ leading figures. Both are facing credible grassroots challengers in their own backyards: former Queen’s Park staffer and activist Lanrick Bennett (Fletcher) and local resident Chris Budo (Fragedakis). Polling from Mainstreet Research suggests that both insurgents are drawing a comparable percentage of votes – about 10 per cent – but Fletcher nevertheless is poised for a convincing re-election over neighbouring incumbent Fragedakis.

The only truly wide-open ward contest in this final preview, Ward 19 is shaping up to mirror its traditional political rivalries at the provincial and federal level. The retirements of both incumbents, Janet Davis and Mary-Margaret McMahon, has cleared the way for a new face on council. A poll by Mainstreet Research finds former single-term NDP MP Matthew Kellway ahead of leading rival Brad Bradford, around whom the ward’s Liberal establishment has largely coalesced. With both candidates trading endorsements from the retiring incumbents – Kellway from Janet Davis, Bradford from Mary-Margaret McMahon – Bradford also saw a big boost from a high-profile endorsement by John Tory. With late momentum difficult to gauge, this will be a race to watch after the polls close.

“[Toronto doesn’t] need a leader who thinks the solution to every problem is to throw more money at it […] We need a mayor who understands the job is to provide taxpayers with the best possible municipal services at the lowest possible costs and to, realistically, move the city forward […] When voters go to the polls on Monday, our view is John Tory is the only mayoral candidate with a proven track record and ability to lead the city forward.”

“Jennifer has a vision for Toronto that is inclusive and progressive. Jennifer has the experience and commitment to improve transit and build the world-class system that our city desperately needs. Jennifer also has ambitious and realistic plans to build affordable housing and tackle our housing crisis. I am proud to support Jennifer Keesmaat for Mayor..”