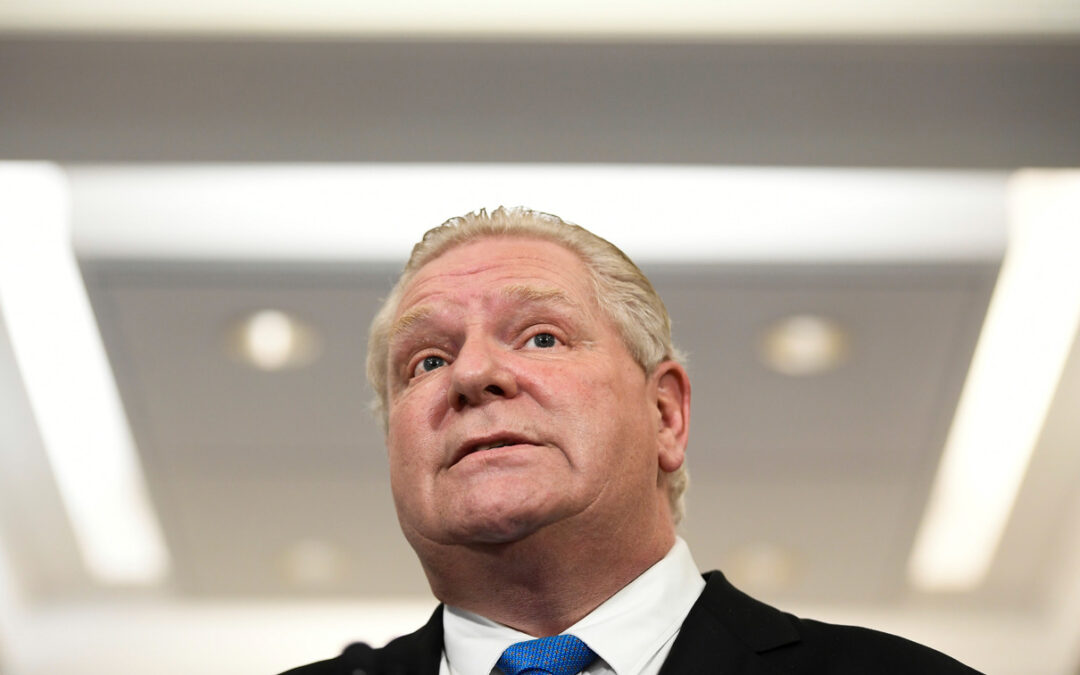 Make no mistake: This was not a typical Ontario budget speech. It was a campaign kick-off document. The Ontario Budget speech made today by Finance Minister Peter Bethlenfalvy contained few surprises; it reiterated and reinforced the themes – and many of the same specific announcements – we’ve been hearing for weeks. The loudest of those themes was that Doug Ford is “getting it done” and only he has an aggressive plan to (re)build Ontario.

We’ve noted some of the major – and minor – initiatives that we think deserve to be highlighted. It’s not a comprehensive list, and more details will emerge in the coming days. For those who want to dive into the depths, the nearly 300-page budget document can be found here.

Unlike most budgets, the Ford government has no interest in passing a “budget bill”, though one was introduced this afternoon. In fact, almost as soon as the Budget was released, the Ontario legislature “rose” until September. Writs of election are expected May 4th, with an Election Day to be set for June 2nd.

In press availabilities today, reporters asked Minister Bethlenfalvy repeatedly whether the same budget would be introduced if the government is re-elected. The Minister refused to confirm this, saying that he could not predict what might happen in the campaign.

Of course, this opened the government up to attack from the Opposition who claimed that the “real budget” was hidden away and wouldn’t be seen until after the election. Government spokespeople were forced to “clarify”, while the Minister was still delivering his speech, that this same budget would be re-introduced should Ford be re-elected.

The Minister’s obfuscation does suggest the plan is for more promises to be released during the campaign, beyond what was revealed today.

Perhaps the single biggest headline coming from this Budget – other than the $160 billion in announced infrastructure spending – is the nearly $20 billion projected deficit for the coming fiscal year. Projecting such a large number is clearly a calculated risk by Bethlenfalvy and Ford. It’s one they can take because they believe none of their competitors have sufficient credibility on fiscal matters and that the PC’s “fiscal conservative” right flank will be assuaged as long as they win.

Ford and his government are okay running a deficit this size – and growing overall spending to nearly $200 billion a year, without any substantial tax cuts – as long as they can deliver new hospitals, highways, subways, LRTs and long-term care homes to ridings across Ontario.

The word “climate” appears just five times in the larger budget document, with no references to cutting greenhouse gas emissions. The government is touting its investments in critical mineral mining as a strategy to grow the electric vehicle battery sector, and indirectly cut greenhouse gas emissions, but many were looking for more specific action on this file.

The Opposition are already pointing out that the “glaring omission” from this Budget document is any mention of autism and children’s mental health funding.

Several key sectors were not highlighted, including forestry and agriculture. But when viewed as a platform document rather than a regular budget, the calculus is evident. There are relatively few seats in the North, where forestry is a dominant industry, and the Tories already hold and expect to retain the majority of votes in rural Ontario.

Today’s budget contained few surprises or “new” news – but today’s budget wasn’t meant to be the last chapter in the Ford re-election campaign playbook, but rather the first.

The agenda is set for the coming election campaign. Premier Ford is clearly interested in making the “ballot question” a focus on “building” – hard, physical building of lots of big projects, with plenty of opportunity for sod turning, ribbon cutting and announcements. But he’s also shoring up his political vulnerabilities with baubles like tax cuts for low and modest-income families, raising the minimum wage and clearing the surgical backlog.

Overall, this budget has a little bit of something for (nearly) everyone. That is both its strength and weakness. With most of the highest-profile inclusions having been revealed well in advance, there are few signature pieces that will spark water cooler discussions (or the digital COVID-era equivalents).

Now it is on to the campaign trail.

Other Items of Interest: 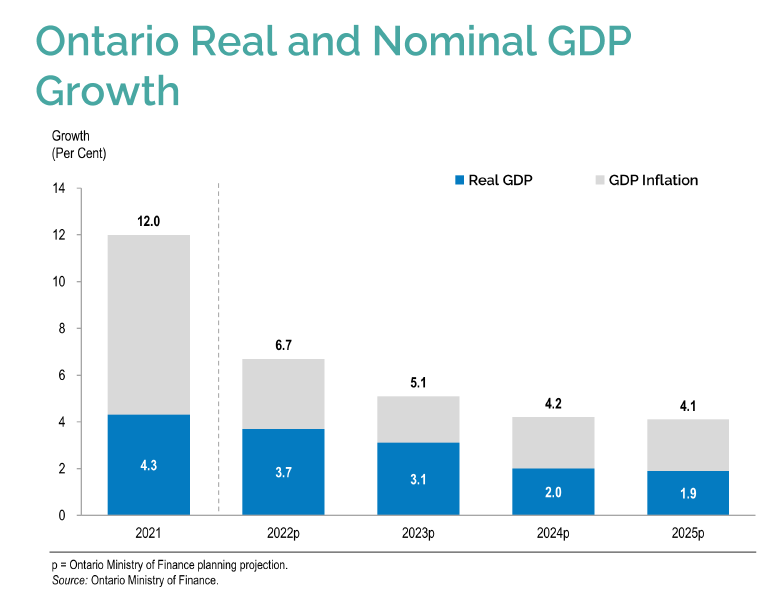 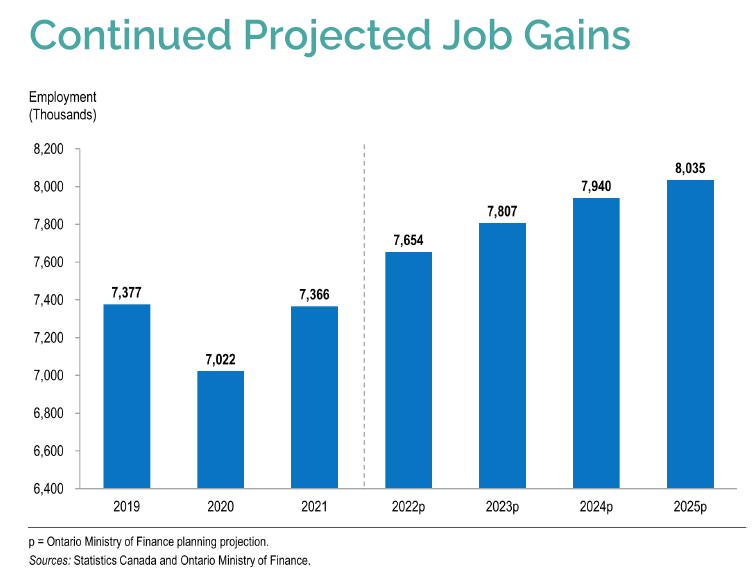 The heavy lifting for this deficit reduction is being done by the surge in revenues, especially sales tax and corporations tax revenue as this chart shows. This unexpected revenue growth gave the Minister of Finance the opening to come forward with a lot of new spending and investments, including a surge of $10.8 billion in health sector funding in just two years. 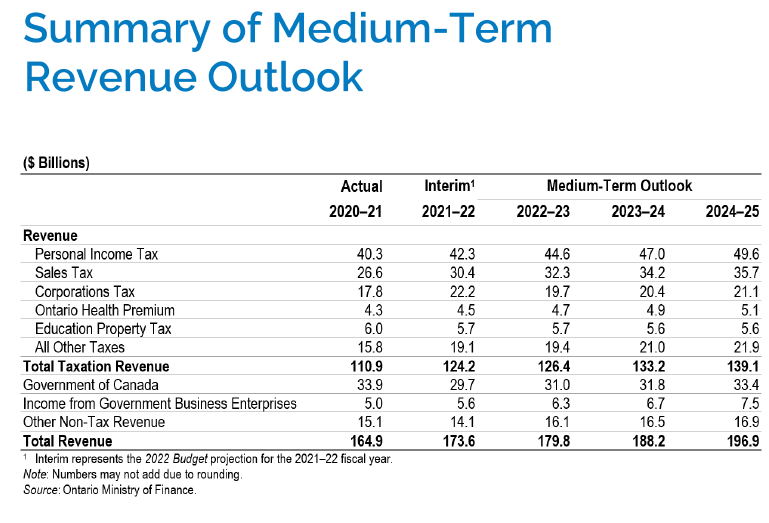 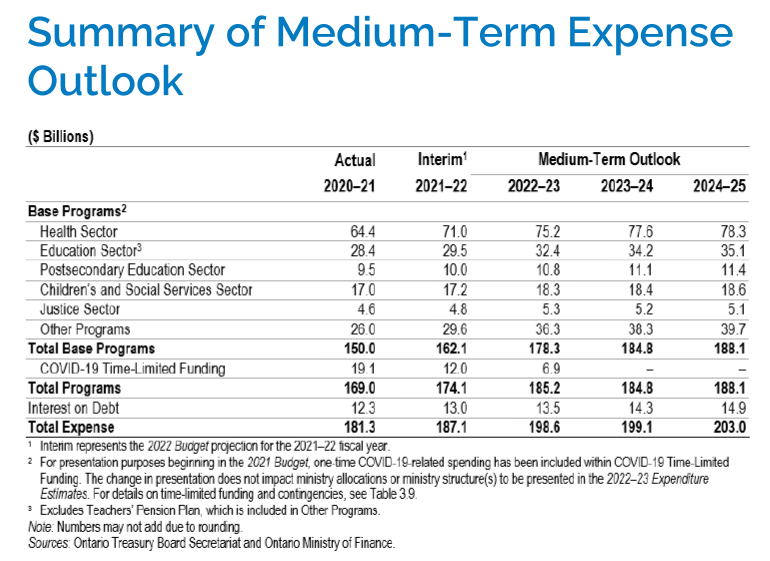 Even still, with the deficit at these levels, if growth rates beat expectations even a little, then the Budget could be balanced in as little as two years. The question for the government at that point will be a matter of whether it wants to balance the budget or continue to increase spending in areas of need.