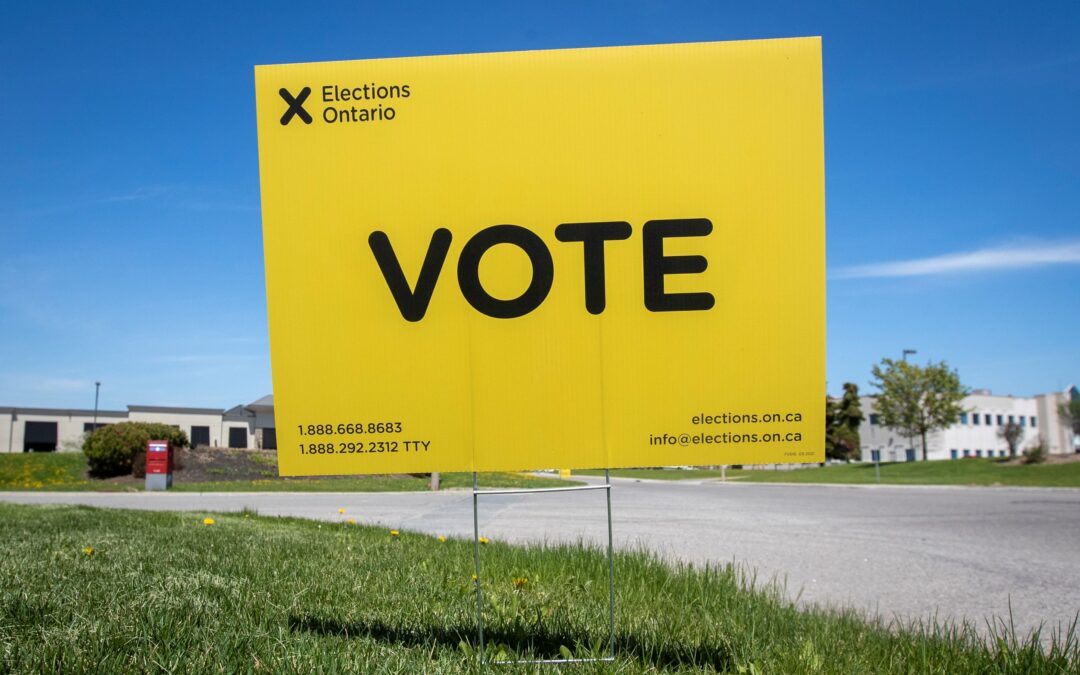 On the eve of tomorrow’s provincial election, Counsel’s own surveys as well most other polls are predicting a PC majority. With these same polls showing very little movement throughout the month-long campaign, some media commentators having taken to calling this election “boring.”

We’ll know the results soon enough, likely a little after 9pm tomorrow evening. As with all elections, there will still be interesting things to watch for, along with some surprises. With some tight local races and larger trends and political shifts across the province, there is plenty worth paying attention to on election night.

We are sharing what our team at Counsel will be watching for. So, pop some popcorn and settle in. It’s going to be an interesting evening!  (Well, at least for political nerds like us.)

Hamilton East-Stoney Creek, St. Catharines, Niagara Falls, Niagara Centre, and Essex are all ridings with a large population of blue-collar workers and a strong private-sector union presence. They are all currently held by the NDP. For example, the last Tory to win in Niagara Centre was Ellis Morningstar in 1975. Since then, it has been a bedrock of the NDP held by party stalwarts like Mel Swart, Peter Kormos and more recently, Jeff Burch.

The PCs under Premier Ford and Labour Minister Monte McNaughton have been working hard at splitting these voters off of the opposition parties and adding them into their coalition – and it seems to be working.

It should be noted that much of this new labour support for the PCs is not coming directly from unions that have historically been NDP-backers, but rather the building trades unions, which were historically more Liberal-friendly.

Will the PCs make these breakthroughs? Watch these seats on election night; they could be close races.  If the NDP lose these seats to the Tories, the change will have a profound impact on the NDP politically and on the agenda of the PCs in the next Ford government.

Kiiwetinoong and Mushkegowuk-James Bay, in Ontario’s North, are traditionally firmly NDP territory. Poll aggregators are showing that these ridings are currently in play for the PCs. Major credit is likely owed to the yeoman’s work that Greg Rickford, Minister of Indigenous Affairs and Minister of Northern Development, Mines, Natural Resources, and Forestry has done in the North. Will it be enough to turn these seats blue? If so, that will be a significant breakthrough for the Tories.

THE REBUILDING OF THE LIBERALS IN THE WESTERN GTA

The riding of Halton (dissolved in 2015 and split into different ridings) and its surrounding area has been reliably Conservative for decades. But the rapid growth of Milton, mostly with 1st and 2nd generation New Canadians looking for single-family homes, has changed the demographics of this riding from rural to decidedly suburban and multi-cultural.

Parm Gill, the Tory incumbent, won in 2018 with a comfortable 11-point lead – but almost all available polling shows the seat trending to the Liberals. Similar trends could shift Burlington and Oakville, if polls hold up. These will be bellwether ridings and, if the Liberals can flip them, will be a sign of strength to build on in the future.

Next door, almost all of the Peel region seats in Brampton and Mississauga are extremely competitive.  Peel will be the centre of action well into the evening on Thursday night. In Brampton, the NDP is fighting to hold on to the gains they made in the last election in seats that were traditionally held by the Liberals over the past two decades. The PCs have strong candidates like Treasury Board Minister, Prab Sarkaria, and they are betting on popularity of the highway 413 promise and a pledge to (finally!) build a new hospital. A number of interesting three-way races are shaping up in the four Brampton ridings. These will be close.

The Mississauga-Streetsville riding is also a competitive race, one of several ridings in which the Liberals are seeking to regain a seat they held through the McGuinty-Wynne government years. Currently held by PC Associate Cabinet Minister, Nina Tangri, Liberal candidate Jill Promoli has mounted a strong local campaign. Promoli is well-known in #onpoli Twitter, having been a health advocate for several years, after tragically losing her two-year-old son to influenza many years ago. For her part, Tangri has been hobbled by a broken ankle throughout the campaign – an injury she sustained just before the campaign started. She has canvassed door-to-door as best as she can on crutches, proving that campaigning is truly a physical grind.

The Tories are energized by an endorsement from long-time Mayor, Hazel McCallion. The 101-year-old former Mayor, known affectionately as Hurricane Hazel, still has incredible influence within the city (just see how many places are named after her!), and has been energetically stumping and fundraising for Ford and his candidates across Mississauga.

And if you’re looking for a peculiar story to watch on election night, check out Mississauga-Lakeshore, where Brian Crombie, the ex-husband of popular Mississauga Mayor, Bonnie Crombie, is running on the “None of the Above” ticket. (And yes, “None of the Above” is a registered political party in Ontario.)  Crombie has a local radio show and a somewhat popular YouTube public affairs show and has been using these platforms to promote his candidacy, even though he has no hope of winning.  Considering the prominence of his ex-wife in Mississauga politics – she was a federal MP before being elected Mayor – running as “None of the Above” is an… interesting story.

THE FORD BRAND IN THE INNER SUBURBS

While Humber River-Black Creek shouldn’t be competitive for the PCs, the polls are showing a three-way race. In past elections, the Tories typically get around 10-12% of the vote in this riding, which surrounds York University in north Toronto, but a major shift took place in the 2018 election. The Liberal vote collapsed from 46% in 2014 to 27% in 2018, while the NDP held steady with about 38% of the vote and won the seat. The PC vote, however, went from 10% to 30% in 2018 – mostly on the strength of “Ford Nation.” Ford has a strong following in northwest Toronto and the 2022 candidate, Paul Nguyen, seems to be benefiting from that strength once again. As the Liberals regain some of their strength, the PC candidate is building on their 2018 breakthrough – all at the expense of the NDP incumbent. Watch for a tight three-way race in this riding that may be decided by just a few dozen votes one way or another.

Just one riding to the south, Michael Ford – nephew of the PC leader – is also banking on the strength of Ford Nation. If current polls hold, Michael Ford is projected to pick up York-South-Weston – a seat where Tory candidates in the 90’s and 2000’s were lucky to break 9% of the vote.

Over in Scarborough, Ford Nation has turned once-solid Liberal seats like Scarborough Centre and Scarborough North into solid PC seats. Even in Scarborough Southwest and Beaches-East York – currently held by the NDP – the Tory campaign is throwing resources into the “Get-out-the-vote” effort to put them over the top and into the win column. Even if these seats don’t flip, the fact that the Tories are competitive is an interesting shift in the political landscape of City of Toronto ridings.  Time will tell if they are sustainable, or simply a phenomenon of Ford Nation.

The Growth of the Greens

In the 2018 Ontario election, the Ontario Green Party won their first ever seat in the legislature. They are looking to build on that, and are targeting Parry Sound-Muskoka as a second breakthrough. While this riding has long been Tory-held at both the provincial and federal levels, the stars appear to be aligning for the Greens to really make a push in cottage country.

Green candidate Matt Richter is running in his 5th campaign and has steadily built support.  After the Liberal Party’s candidate renounced his candidacy after controversy over some past writings, the progressive vote seems to be coalescing behind Richter. If the Green Party does, in fact, double its caucus, this may well become one of the big stories of the night.

Progressives often lament the fact that their share of the vote gets split between the Liberals, NDP, and the Greens. With the dawn of new right-wing political parties, those progressives are probably giddy at the prospect that the PCs will be facing their own version of vote splitting for the first time in Ontario.

Let’s be clear – the New Blue and Ontario Party are still very much in their infancy and their platforms are not especially clear or even logical. New Blue’s leader, Jim Karahalios, spends almost as much time attacking Ontario Party Leader, Derek Sloan, as he does sniping at Doug Ford and the other leaders. Their supporters, mostly upset by COVID-19 health restrictions, make up a fraction of the voter pool – but they are a vocal fraction and they are angry. The question is not whether these parties can win a seat, but whether their support will be siphon enough votes from the PCs in select ridings to allow either the NDP or Liberals to win.

The riding to watch for this phenomenon is Peterborough-Kawartha. The incumbent PC MPP, Dave Smith, is in danger of losing enough votes to the New Blue and Ontario Party that the Liberals could come up the middle and take the seat. We’ll be watching this race closely on election night.

Barrie–Springwater–Oro-Medonte is a battle of heavyweights. The incumbent here is PC Doug Downey, Ontario’s Attorney General. He is being challenged by Liberal candidate Jeff Lehman, the mayor of Barrie. The Liberals have poured many resources into this riding in order to flip it and establish a foothold in the region. There have also been rumblings that, should Liberal leader Steven Del Duca fail to win his seat and lose his grip on the Liberal leadership, Lehman would have interest. The outcome of this race may have great ramifications for the future of the Ontario Liberal Party, as well as determining whether the Ford government keeps one of its strongest performers, Doug Downey, in the Cabinet.

Depending on which of the aforementioned trends prove true on election night, we could be in for some recalibration in the leaders’ offices for both the Ontario NDP and the Ontario Liberals.

With regard to Andrea Horwath and the NDP, rumblings have persisted over the course of the campaign that there would be widespread support among the party grassroots for her ouster if the NDP, as expected, does not form government. This is her fourth election at the helm of Ontario’s NDP, which by Canadian standards, is quite a long leash for a leader who has not brought victory to their party. (Only Manitoba’s Gary Doer has won an election on his fourth attempt as leader, and went on to serve as Premier for a decade.)

While this is Del Duca’s first campaign as Liberal leader, polls are indicating that he has a real fight on his hands to win his own riding, Vaughan-Woodbridge, over PC incumbent Michael Tibollo. Del Duca represented the riding from 2012 to 2018, so while he is battling a name awareness challenge across the province, that is not the case in Vaughan-Woodbridge. Should the Liberals not make meaningful gains elsewhere in the province, calls for his resignation may grow louder.

All the while, Green Party of Ontario leader Mike Schreiner is trending upwards in overall voter support, and, as mentioned, may have a new seat to show for his efforts. With this being the case, tomorrow evening and the ensuing couple of weeks may prove to be decisive for Horwath and Del Duca.

These are just some of the interesting races and trends we’ll be watching tomorrow, on election day in Ontario! If you haven’t voted yet, be sure to do that before polls close and then settle in to watch the results. It should make for some interesting television.

Good luck to all the candidates! It takes a lot of guts to put your name on a ballot. We wish all of them well.