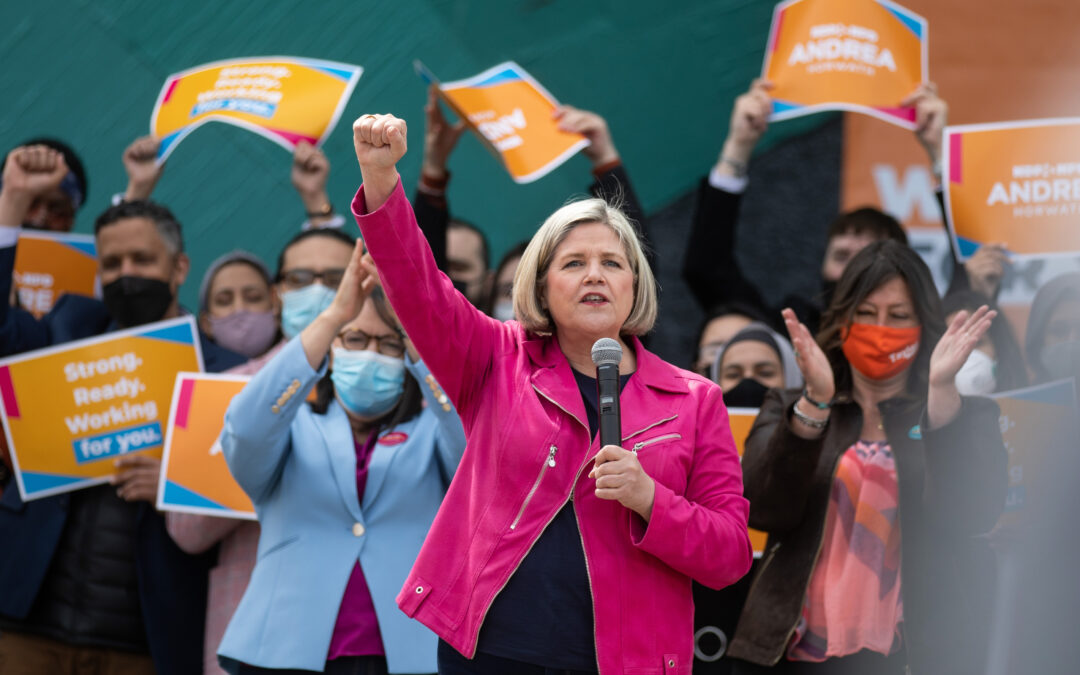 Ontario’s NDP: Can They Unite the Progressive Vote and Defeat Ford?

In the fourth edition of Counsel Public Affairs’ 2022 Ontario Election Insights, we look at the Ontario NDP and examine the strategies they might employ to build on gains from 2018, defeat the Ford Conservatives to form government, or at least hold on as the Official Opposition.

Can the NDP translate the popularity of their Leader into new seats? Will their better-financed campaign be enough to hold off challengers in their incumbent seats and win new votes to pick up new seats? Let’s explore the NDP’s opportunities and challenges in an election which offers them the best chances of forming government in Ontario in over 20 years.

Andrea Horwath has long been underestimated and underappreciated as a political force in Ontario politics, but her record of achievement cannot be ignored. She has held the NDP leadership since 2009, and was an MPP and three-term Hamilton City Councillor before that.  She is a strong campaigner and has improved with each of her three campaigns as leader. In her time at the helm, the NDP have gone from holding 10 seats in the election before she became leader, to 40 after the 2018 election. This strong, steady growth has earned party members’ confidence, scoring 85% support from ONDP delegates in her most recent leadership confidence vote.

Can the NDP grow further, or have they reached their ceiling?  The numbers show some glimmers of hope. An Abacus poll from late April shows that 61% of voters know Horwath “pretty well” or “very well” – not bad for a leader whose party hasn’t held government under her leadership. For reference, only 41% of voters had the same level of knowledge of Ontario Liberal Leader Steven Del Duca. Other polls, however, show the NDP trailing the other parties at mid-20’s level of support. Horwath’s personal brand recognition has yet to translate into popular support for her party – at least in the immediate pre-election period.

The 2018 election was the NDP’s most successful since they formed government in 1990. Progressive voters, disappointed in the Wynne government, flocked to the NDP, and Horwath led the party to 40 seats and 33.59% of the vote.  Since then, however, the NDP has not been able to break above 30% popular support in any poll taken since the 2018 election. Through all the turmoil of the first 18 months of the Ford government, through the pandemic, and despite the advantages of being the Official Opposition, the NDP have not – so far at least – been able to break through voter psyche and be seen as a serious prospect to form government.

That leads us to where we are today – the early days of the election campaign.  The polls today show the PCs ranging from 36 – 40%, the Ontario Liberals ranging from 25 – 32%, and the NDP ranging from 18 – 25%, which is coming back down to traditional NDP popular support territory.

The NDP platform, released on April 25, just a few days before the tabling of the PC’s Budget, was titled, “They Broke It, We’ll Fix It.” It is a comprehensive, detailed document that contains few surprises, mainly outlining familiar policies for the New Democratic Party: increased protections for workers; investments in healthcare and education; and policies to protect racialized groups and 2SLGBTQIA+ communities.

It’s a well-crafted platform that plays to the NDP’s strengths and iterates upon their existing policy proposals. Their promises to reduce childhood mental health wait lists to no more than 30 days and to fix the Ontario Works and Ontario Disability Support Program to help people with disabilities live with dignity are significant, but it is yet to be seen if this election campaign will be a battle of policy ideas that will drive voters’ decision making.

THE NDP’S PATH TO VICTORY

So, how can Horwath and the NDP cut through? How can they get the traction they need to hold the seats they have and gain the 23 seats they need to win this election? The NDP will have to target their next-tier of ridings with precision in both their air and ground games. The NDP have announced that they will have substantially more money this campaign than they did in 2018. This will mean better-resourced incumbent ridings to hold off challengers and new resources to pick up new seats. These target ridings will have more paid organizers, more local ads promoting the candidate, and more visits from the leader. You can tell the target seats for the NDP by watching where Andrea Horwath’s tour taker her.

And of course, no party wins government without a strong performance by the leader.  As an experienced campaigner, Horwath has the skills to pull this off.  She is the only woman leading a major party in the race. The visual contrast that she represents – not to mention the contrast in styles and approach – with Doug Ford and Steven Del Duca will be especially apparent on the debate stage. If either of those two leaders falter, Horwath should have the campaign experience necessary to pick up that opportunity. One smart move early on in the campaign was to come right out a declare that in this election, she was running to be Premier. You don’t get the job you don’t apply for.

In the coming days of the campaign, Horwath will have to make two compelling arguments to the Ontario electorate; one, that this is a change election and the Ford government deserves to be defeated, and two; that the NDP, the Official Opposition and the only non-PC party with status in the legislature, are best positioned to be that change.

We’ll be watching closely to see if the NDP’s message of “vote for us and we’ll fix what’s broken in Ontario” is a convincing-enough argument to non-conservative voters to win the ‘progressive primary’ and lead the NDP to turn their sights on Doug Ford in the latter weeks of the campaign.